Pucks in the net, Bears on the ice the plan for the Prince Rupert Rampage Saturday night

The final CIHL game for 2017 is on the schedule for tomorrow night at the Jim Ciccone Civic Centre, as the Prince Rupert Rampage look to keep to their winning ways as they make ready for a visit from their Northwest rivals from Terrace.

The Rampage with a  5-4-1 record are currently tied with both Quesnel and Terrace for first place in the CIHL, though with the Rampage record consisting of ties and Overtime Losses, the are pegged at third spot in the five team circuit.

Still, a victory on Saturday night would put them in good position to head into the Christmas break with a bit of a cushion over the River Kings. To get there, the Rhinos will be looking to Kory Movold to keep to his current scoring pace, the Rampage forward leads the team in scoring heading into weekend play with 4 goals and 7 assists.

Cody Cringen, is the team's top sniper, with five goals on the year so far.

One key to success for tomorrow night will be to shut down the high octane offence that the River Kings will be bringing to town.

After 11 games so far, Terrace has scored 52 goals, second only to the Kangaroos in overall offensive push.

On defence, the River King have much the same record as the Rampage, having surrendered 47 goals so far, compared to Prince Rupert's 46.

Puck drop on Saturday is 7PM and for those in attendance, the highlight of the night may not come from the scoreboard but from the the first annual Teddy Bear Toss to be hosted by the team.

Teddy Bears will be available at the door for $10 each (or you can bring your new and clean toy from home wrapped in a plastic bag to participate), with the money raised and the bears that are tossed to be donated to the Prince Rupert Salvation Army's Christmas Hamper program.

Keeping an eye on the scoreboard however will still be worthwhile as it could help put you and the Rampage into the Holiday spirit, with the Port of Prince Rupert continuing with their Goals for Giving campaign, where the Port pays out 100 dollars for every Rampage home game goal.

Since they first launched the campaign in 2012, the Port has forwarded 13,000 dollars to the local programs for the Prince Rupert Salvation Army. 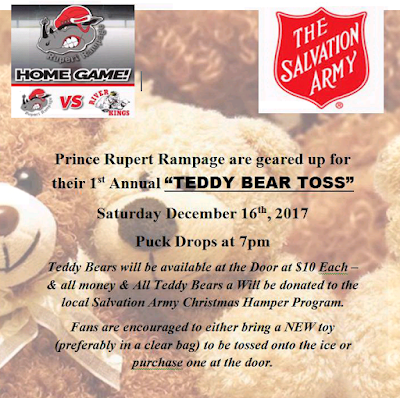 One note for Rampage fans for Saturday is that parking could be a bit of a challenge for game time, as a large Christmas celebration is also taking place in the Civic Centre complex at the same time.

Calling up some fellow Rampage fans and car pooling it to the game could help reduce the congestion that may be found at the McBride street facility.

Once the final whistle blows on Saturday the Rampage will be looking forward to some significant down time, they are over both Christmas and New Years

The team does not return to the ice until January 6th when they head for Kitimat, marking the home stretch for the 2017-18 CIHL regular season which comes to an end on January 21st.

For  more items of note on the Rampage see our Results/Scores page here, as well as our CIHL News archive here.
Posted by . at 3:34 PM