Watson Island planning and Pembina welcome, made for Wednesday theme at Convention Centre 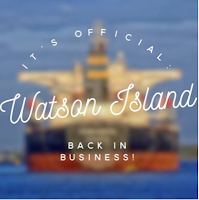 The long promised update on the future for Watson Island was delivered on Wednesday evening, as the City of Prince Rupert hosted a three hour Open House at the North Coast Convention Centre at Chances Gaming Centre.

The 4 to 7 PM presentation originally was intended to be a review of the city's progress on the Watson Island Industrial site, however with word of Pembina pipelines plans to move forward with a proposed LPG terminal at the in Industrial site, the evening also become a form of community welcoming event for the Alberta based energy company and its investment plans for the North Coast.

According to Mayor Lee Brain through his twitter account, the night attracted over 150 Rupertites anxious to learn more about both Watson Island and the LPG plans for the site.

While Councillor Blair Mirau was also busy on Social Media to highlights thoughts on the success of the night.

The media accounts of the Mayor's showcase event offer a glimpse of the event as well, and provide for some interesting themes that came out of the night.

Some of which might require some further background from the Mayor and Council as they move forward with the Watson Island blue prints into 2018.

Among some of the notes from the Mayor that were relayed through the newspapers and television:

More potential projects are under consideration for the Watson site, though no details could be provided at Wednesday's Open House.

The tax and lease revenue that the City accumulates over the next few years will be used to shift the burden away from the residential  taxpayers and more towards industrial ones.

The Pembina Project will take up roughly 13 percent of the Watson Island site.

From the Pembina reps, the Northern View gained some interesting insight into the development plans as the Pembina LNG project moves forward.

The next step for the Company is to apply for an air discharge permit, as well as for an on-site enclosed flame. With Pembina also required to seek authorization for loading LPG from the Port of Prince Rupert. The Terminals rail operations will also need to have a permit, which the company will apply to Workplace BC for.

Company officials also noted that there will still be various environmental tests taking place on the lands of the site leased from the City and that all environmental hazards will remain the responsibility of the city. For their part Pembina is working very closely with the city to ensure that the leased lands are cleaned up as directed by the Ministry of Environment.

That final item is something that the City may wish to follow up on for the public, by providing for some additional background that will outline how that process of site remediation will continue as the development moves forward.

As well as to review what kind of cost the city may be still be facing as that clean up continues.

Council may also wish to indicate how much, if any, those potential costs could impact on the revenue stream that the terminal could eventually deliver.

Considering how the terminal project is starting from scratch on the land at Watson, some further updates might provide a more complete overview when it comes to what additional areas that the City will have to provide for when it comes to infrastructure for the new industrial terminal.

A comparison for the public as to what Pembina will be responsible for and what work the City will be required to provide for, could give residents a better picture as to what is still to come in the way of development costs before the first shipment leaves the dock.

The night in review from the Northwest media can be found below:

As for the welcome in recent months for Pembina's investment plans, the Alberta company must be quite pleased with the warm and enthusiastic local reaction from Prince Rupert City Council.

As they noted for the local media during Wednesday's event, they had considered some other locations for their proposed LPG terminal and it would seem that the welcome from Prince Rupert has been much warmer than in some other past instances from other locations.

In 2016, the company had previously been exploring Portland Oregon for a proposed 500 Million dollar terminal location, but subsequently decided against those plans, which sent the company back to the search for a new location for their project.

The development proposal for the Portland area had faced some significant push back from that city's council officials and community members at the time, with civic officials observing that it did not meet the standard that Portland had put forward for the Oregon city's Climate Action Plan or environmental values.

Some of the reviews from that period of time can be found below:

The project had also become a target for the Oregon environmental movement, which had a number of concerns related to the proposed development.

Portland's call for cancellation however did bring a bit of controversy to the city council doors, with the business community making note of the lost opportunity to grow the economy and create jobs.

As Pembina observed on Wednesday, the path towards opening the terminal in Prince Rupert still has a ways to go, with the permitting process still ahead for the Watson location, as well as for the awarding of construction contracts and the call out for employees as it nears completion.

On the jobs side of things, in previous information releases, Pembina has suggested that some 200 construction jobs could be created as the terminal plans develop, with 20 to 30 jobs created for full time work once the terminal is operational.

As company officials suggest, more details on their progress will be coming in the months ahead, which can be reviewed through the Pembina website.

For more background on the new direction for Watson Island see our archive page here.

Updates related to the Pembina proposal for the industrial site can be followed through our Pembina archive page.
Posted by . at 9:21 AM