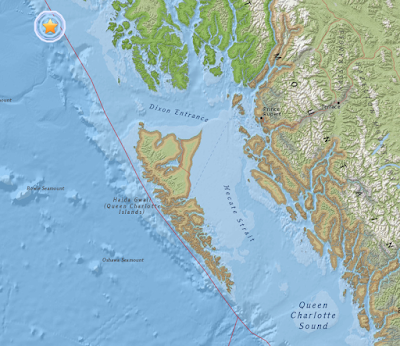 A mild temblor rolled off the coast near Craig, Alaska just before midnight on Christmas Day, listed by the USGA as being of  3.6 magnitude at a depth of 7.8 kilometres.

The epicentre was marked at 122 kilometres West of Craig, Alaska,  making it 314 kilometres to the West-Northwest of Prince Rupert.

The seismic event was not of noticeable impact to any of the Alaskan communities nearby and did not generate a Tsunami warning.

It is the second mild event to be recorded in that immediate area this month, with a similar sized event noted back on December 12.

You can review our listings of recent seismic events along the North Coast, Haida Gwaii and Southeast Alaska here.