Yesterday's announcement by Premier John Horgan that the NDP government will continue on with development of the Site C Hydro electric project in the Peace region of the province has received a mixed reaction so far, particularly from those who have concerns on environmental issues in the province.

Mr. Horgan made his announcement on the project yesterday morning, providing a number of themes and contributing factors that led to what he called a very difficult decision and one which for the most part the NDP is noting was caused by the past work on the file by the BC Liberals.

In the Northwest, North Coast MLA Jennifer Rice is providing for the NDP's message for constituents, with Ms. Rice taking to her Facebook page to share her thoughts and to deliver the Premier's thinking on the massive, but controversial hydro project.

Among her comments were a relay of the NDP's talking points related to the Liberal's "legacy of megaproject mismanagement" and how it left the NDP in a terrible situation and seemingly with little option but to proceed.

On the Federal side of the issue, Skeena-Bulkley Valley MP Nathan Cullen, a fellow member of the NDP also shared his disappointment at the decision to move ahead with the project.

And much like his provincial partners he too put the finger of blame directly at the feet of the former Premier Christy Clark, throwing Prime Minister Trudeau into the mix as well.

He repeated what has become a frequent call for the need to address the concept of Social Licence for such large scale projects and took aim at what he describes as a lack of proper consultation along the way by both the Provincial and Federal Liberal parties. 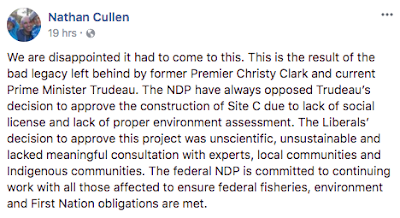 The decision to move forward with the proposed development did not sit well with the NDP's partners of the Green Party in the Legislature.

However, as disappointed as leader Andrew Weaver seems to be, the Greens don't seem to be inclined to make it an issue of confidence in the NDP government, nor to bring them down over the controversial project.

Some notes on the Site C announcement can be reviewed below:

More items of note on the work of North Coast MLA Jennifer Rice can be found here.

While our archive of items related to MP Cullen is available here.

A wider overview of the provincial political scene is available on our Political portal D'Arcy McGee.