It's beginning to look a lot like ... Chad Estrada time! 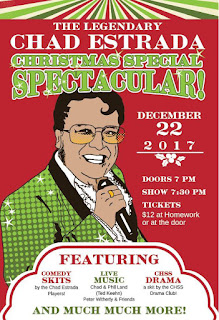 In what has become a Prince Rupert Holiday tradition, the members of Harbour Theatre will once again be luring Chad Estrada out of his semi-retirement, with the annual Chad Estrada Christmas Special Spectacular set for Friday night at the Third Avenue theatre.

The Legendary Mr. Estrada takes to the stage with his Christmas Spectacular at 7:30 PM, with the doors to the Tom Rooney Playhouse opening up at 7 that night.

Much like Santa himself, Mr. Estrada normally makes but one appearance per year and arrives from points unknown (some say the Cayman Islands, others a castle fortress in Switzerland), though he travels to his annual gig in a slightly more modern conveyance than a sleigh and nine reindeer.

And as is the case with the Jolly Old elf, an Estrada appearance brings happiness and Joy to all that gather in the fabled Tom Rooney Playhouse on Third.

Friday's showcase event features the genial Mr. Estrada recounting many of his experiences from his lengthy career on the North Coast, joining the showman's showman for the night will be the Chad Estrada players with a collection of Comedy Skits that will capture the pulse of the city and the season.

As well, the Charles Hays Drama Club drops in with a special performance for the Estrada Spectacular.

A few other surprises are planned along the way to help you usher in your holiday season as only Prince Rupert's premier showman can deliver on.

Tickets are available for 12 dollars at Homework in Cow Bay, or at the door.

You can get any late updates on Friday Night's Spectacular from the Harbour Theatre Facebook page.