About our still missing City Council Timeline for December 4th

Regular readers of the blog by now have probably noticed that our usual review of the Monday evening City Council session is still in limbo, our normal turn around time of a day or so following the Council sessions, lost to a pair of strange occurrences coming from the city's flow of information from the Council records.

The Council Timeline feature for those unfamiliar with the project, is one which makes use of the City Council Video Archive, allowing us to direct the reader towards some of the key issues from the Council gatherings and for the most part, allow the Council participants to tell the story of the night, with their own words, as normally made available for residents to review through the City's YouTube archive.

So far this week however, that usually reliable form of council communication has curiously gone missing, with an original posting of the Monday Council session put to the You Tube page on Tuesday, and then seemingly taken down, without any indication from the City as to why the online archive of record has been removed. 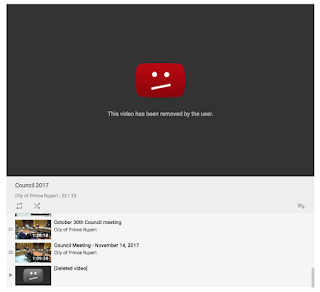 Our usual back up plan, which is to have an audio recording of the council session on hand to help with the report, was also thrown a twist on Monday, with a surprising change of viewing plans for those watching the Prince Rupert Council session through the City's website.

As we noted on Tuesday, that video feed disappeared shortly after 7:20 PM, replaced by the one hour live feed for the Kitimat Council Session, which did provide for a fascinating opportunity to see how the concept of municipal democracy works in that community. 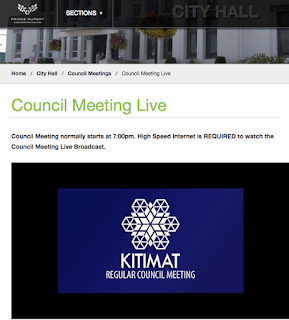 To this point, neither of those somewhat strange occurrences has been explained through any of the City's range of communication options.

As things turned out when it comes to Prince Rupert Council, many of the themes we previewed on Monday morning, in the end were adopted by Council, in many cases as they were presented in the Agenda Package of the night.

The city's plans for Community Enhancement Grants for the most part followed the lead of the City's finance department, with Mayor Brain making note of the Council decisions through his Facebook page this week.

You can review the list of recommendations that will form the funding levels for 2018 from our preview notes here.

As well, Council moved forward with a proposal to establish a supportive housing residence for men that are re-entering society following treatment for the addictions.

As Councillor Blair Mirau noted through his Facebook portal following the Monday meeting, Council having given the zoning by law a first reading will now send the proposal back to the proponent, for further consultation with the community and at some point a Public Hearing.

You can access some of the background information from our Monday preview of that agenda item here.

Should the City return the now deleted video to its You Tube archive, we'll recap the other missing elements from Monday's meeting as best we can, with any additional stories to be found from Council Session Archive page here.

For now though and since we can't view our own council proceedings for the moment.

Perhaps travel with us a bit and take an opportunity for a chance to watch Kitimat's Mayor Phil Germuth lead his council of six through their workload.

Through the course of their one hour session, our neighbours to the east offer up some interesting approaches to information sharing with the community, including some ideas that our own City Council in Prince Rupert might want to explore, such as a comprehensive Policing report from that city's RCMP detachment officer in Charge.

For past items of note related to Prince Rupert City Council see our Council Discussion archive.

Update: The video related to the December 4th Council session was returned to both the city's website and You Tube archive sometime on Friday.

You can review the thirty nine minutes and forty two seconds of council deliberation on civic issues from the video below: