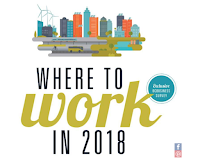 BC Business is bringing the end of the year to a conclusion on an optimistic note for a number of British Columbia communities, as the business journal reviews the 36 best communities to work in across the province.

And this year, Prince Rupert has made a significant jump in the rankings, increasing by eleven spots its place in the listings and cracking the Top Five.

Results which find Prince Rupert joining our neighbour to the east in Terrace as among the Five Best Cities to work in BC.

The high standing coming from strong results in average household income which closes in on $100,000 and a five year income growth of near 23 per cent on the North Coast.

The annual report which examines communities with a population of over 10,000 residents is hosted by the Business magazine and makes use of data research from Envioronics Analytics.

Their number crunching examines the elements that British Columbians are looking towards as they build careers and reviews the economic factors that contribute to the region.

The one peculiar element that the survey reviews is the last one on the list,  with the review of the Unemployment rate, which provides for a surprisingly low number of 5.74 percent for Prince Rupert, which seems somewhat optimistic considering the much documented troubles of the fishing industry as one benchmark for past employment in the community.

And when it comes to their unemployment report even the BC Business survey hedges its bets on that a bit, with this advisory Environics Peter Miron, as to how they tabulated their findings in the employment category.

“If you see an area with very a low unemployment rate, it could be because everyone’s got a job,” ... “But it could also mean that everyone who doesn’t have a job has now been so discouraged looking for work that they’re no longer in the labour force.”

Regardless of the curiosities of the evaluation process, a placement in the top Five is worth a further review.  And you can review the full report for all thirty six communities here.

The snapshots for both Prince Rupert and Terrace can be examined below: 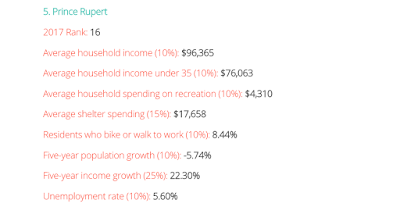 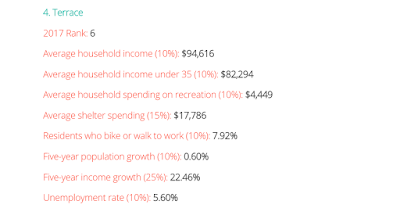 One contributor to the employment picture in Prince Rupert and across Northern British Columbia is the Port of Prince Rupert and on Monday they picked up on some of the buzz about the twin placements of the Northwest in the BC Business listings.

A short snap shot of some of the industries of the region that create the employment that fuels the  regional economy can be reviewed here.
Posted by . at 8:53 AM

Email ThisBlogThis!Share to TwitterShare to FacebookShare to Pinterest
Labels: BC Business Best places to work in the province listings