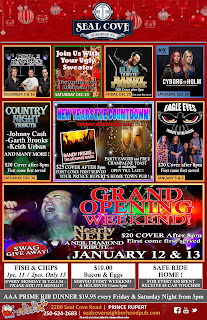 They have only been open a few months, but in a short period of time the relaunch of the old Solly's location as the Seal Cove Neighbourhood Pub has created a fair bit of buzz in the city's entertainment scene.

Beyond the complete renovation of the pub itself, and a selection of menu items that would satisfy many appetites, the Seal Cove Road pub is taking on plans for an ambitious live music selection over the next few weeks.

Already having played host to Prince Rupert's Triple Bypass, the heart of the holiday season entertainment rolls on through this week with a number of artists lined up to help bid farewell to 2017 and showcase a New Year ahead.

Friday night it's an Elvis tribute with Randy Friskie

And at mid-month the Seal Cove Pub celebrates its Grand Opening with a weekend featuring a Neil Diamond Tribute featuring Nearly Neil.

Seating for all events is based on a First Come, First Seated situation with the Cover charges all listed at the 20 dollar range.

Email ThisBlogThis!Share to TwitterShare to FacebookShare to Pinterest
Labels: Seal Cove Pub rolls out the entertainment options in Prince Rupert