The transportation corridor between Prince Rupert and inland areas seems to be suffering some stresses and strains of late, with farmers and grain exporters on the prairies the latest to express some concerns over shipping delays and backlogs at Prince Rupert port facilities.

The Western Producer, a trade publication for the agricultural economy has taken note of a slowing of shipments through Canada's west coast, with the CN Rail infrastructure making for much of the focus of the report.

In the article, CN officials have acknwoledged some of the issues that are affecting shipments and observe that they had been "blindsided by the growth of intermodal traffic in Western Canada, which has reduced its ability to properly service the grain sector"

The most recent Update from CN on Grain shipments for customers is from the week of November 19 to 25  and offers up a few notes on the latest levels of shipments and performance levels.

It places Prince Rupert at third spot when it comes to volume of Grain shipments at the three main ports that CN transports grain to. With Vancouver receiving the largest volume, with Thunder Bay next just edging out Prince Rupert's numbers. 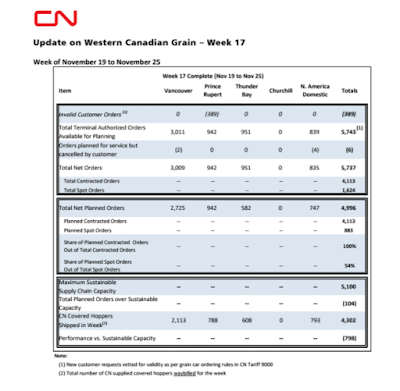 How CN approaches is delivery of grain products to export terminals can be reviewed here.

The increased growth in other commodities and the need for CN to respond to that growth has also provided for contributing factors to the slowing movement of grain from prairie terminals to port facilities.

CN has launched an aggressive recruitment campaign of late to try and fill the number of positions that they have recently advertised for, hoping to provide for new crews and add to the railway's requirements as soon as possible.

In addition to the CN Rail woes, the news publication notes that some of the shipping issues out of Prince Rupert are related to some sort of labour dispute at port facilities here. Though no details are provided as to the nature of the dispute, or if it continues to provide for delays to getting product to export markets.

You can review the full article fro the Western Producer here.

As we noted earlier today, container shipments have also been the focus of the shipping community of late, with dwell times at Fairview Terminal resulting in delays of movements through the North Coast gateway.

Notes on Prince Rupert Grain can be found here.