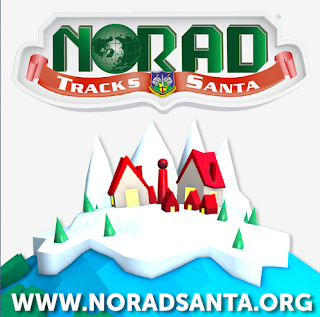 The annual journey of the North Pole's Number One Delivery Guy is underway and as this Christmas Eve moves through the day on the North Coast and into the evening we will check out his progresses with some snapshots of Santa's journeys across the many time zones of the globe.

To follow the Man in the Red Suit and his team of reindeer you can find up to the second reports from the NORAD tracking stations across North America as they take note of stops along the way and where the flight plan is heading next.

The Radar and Satellite Feeds are live and ready to deliver news from this link.

Updates are also available through the NORAD twitter feed.

While a NORAD Tracks Santa YouTube page also features notes on the journey for today.

As well, while the youngsters of the Northwest and Southeast Alaska wait for Santa's stopover, you can explore the music, games and other features available from the NORAD Site Here.

Google as well has developed a page of entertaining fun for youngsters to pass the time until they have to head for bed and await Santa's arrival, you can check that page out here.

The journey began in Eastern Russia, Australia and New Zealand a few hour ago and the busiest night of the year for the Team at the North Pole won't stop until Santa has wrapped up the night in Northwest BC, Alaska and Highway before he heads off to points unknown for a well earned rest.

Some short clips from the NORAD updates for the Day can be found below:


Lift off from North Pole


Australia, New Zealand and Eastern Russia made for the first Stops of
the Day from earlier this morning

India was next on the itinerary for this very, very busy day for Santa.

At 10 AM, Santa has just wrapped up the stopover in Moscow, Russia

Xaípete from Greece, Santa was seen over Athens just before
the Noon Hour British Columbia time

Bethlehem,  Cairo, Jerusalem, Gaza City, Istanbul, Beirut, Riyahd
and Damascus are just a few of the spots Santa has visited over the last hour.

And it's on to Europe for Santa, as he crosses over Italy on his way to points North

Paris, Warsaw and Berlin were among the stops as we hit the 3PM PT mark for Santa's journey, as he continues to fly his way towards the East Coast of Canada and first landfall at Newfoundland

Dublin, Edinburgh, Cardiff and London were the sightings for the last hour as Santa
continues to drop  off the presents around Europe.

It was on to South America with stops in Brazil, Venezuela and the Caribbean to name a few of the locations on the travel plan

Into the North again towards Greenland

Canada's CF16 jets out of 3 Wing Bagotville, Quebec picked up the escort duties into North America as Santa made his descent into Newfoundland and Labrador airspace

The First sightings in the USA came out of Cape Code as Santa shuffles between Nova Scotia,  New Brunswick, Maine and Massachusetts

A stop in Washington DC and a quick check of the naughty and nice list ...


Youngsters in Toronto, Ottawa and Montreal report the sound of hooves on rooftops as Santa heads through Central Canada this hour.


With stops in Thunder Bay, Winnipeg, Chicago and Saskatoon,
Santa gets even closer to the British Columbia border


Colorado, Montana, Alberta and the NorthWest Territories, those are the points punched into the GPS for this hour as Santa continues his trek towards British Columbia this evening.

The Video is a little slow coming in as Santa works his way back North from Stops in New Mexico, Arizona, and parts of California ... but his arrival is but minutes away from Southern British Columbia and all boys and girls should be nestled in their beds by this point ...


The first of the video images comes from San Francisco as Santa begins to line up his sleigh for an entry in British Columbia.

A satellite still photo captured Santa making his way across Kitimat on his way to Juneau, Alaska

Moments later, reports first from Port Edward and then from the west side of Prince Rupert indicated that Santa had arrived on the North Coast, with the Seal Cove Coast Guard Base making note of some clatter up above Seal Cove Circle as Santa turned northwards towards Lax Kw'alaams and on to Alaska.

He sprung to his sleigh, to his team gave a whistle
And away they all flew, like the down of a thistle
But I heard him exclaim, ere he drove out of sight

Happy Christmas to all, and to all a good night.