The Federal Government has selected eight new locations to be placed on Canada's Tentative list for World Heritage Sites and one of them isn't too far off the coast from Prince Rupert harbour.

The Glass Sponge Reefs of Hecate Strait and Queen Charlotte Sound were announced Wednesday as one of the eight by Catherine McKenna the Minister of Environment and Climate Change, marking the first addition to the Tentative list from Canada since 2004.

Parks Canada identified the three areas that best support the Glass Sponge Reefs inclusion as a World Heritage site, among their notes are:

The glass sponge reefs create an oasis of life on an otherwise featureless seabed, in the depths of the Pacific. Their intricate structure provides shelter to numerous species. 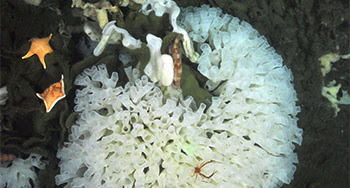 You can review more of the Parks Canada outline for the Glass Sponge submission here.

The other locations added to the list can be examined here.

42 applications were received as part of the process for consideration for Canada's tentative list, they were reviewed by an independent Ministerial Advisory Committee which made their recommendations to Ms. McKenna, noting that the eight listed had the strongest potential for successful inscription as World Heritage sites.

The eight sites highlighted on Wednesday will join six sites from when the tentative list was updated in 2004, among those sites included is Gwaii Haanas, which was noted as meeting five of the World Heritage Site criteria at that time.

At the moment there are 18 World Heritage sites located in Canada, with the most recent addition to that list noted in July of 2016 when Mistaken Point, Newfoundland and Labrador was included in the listings.

You can learn more about the Government's selection list here.

The Global UNESCO World Heritage list can be reviewed here.

The Glass Sponge reefs of Hecate Strait and Queen Charlotte Sound were the subject of one of this years North Coast Marine Speaker Series events, review some of our notes about that November event here.
Posted by . at 8:55 AM