Empire Foods, the Nova Scotia based parent company of Sobey's, which operates the Canada Safeway brand in British Columbia is making some news this week, with plans announced yesterday to change over some 25 per cent of its Western Canada stores to the discount brand of FreshCo.

The key notes related to the shift to the FreshCo concept can be reviewed below:

The Company is also announcing that it will move forward with plans to convert up to 25 percent of its 255 Safeway and Sobeys full service format stores in Western Canada to its discount FreshCo banner over the next five years.

"This is a very attractive strategic and financial opportunity for us that will grow our market share in the Western provinces in a profitable way" said Michael Medline. "Our comprehensive research and analysis shows that the West is fertile ground for 'small box' discount and that our FreshCo banner will resonate with consumers in Western Canada"

The FreshCo stores in Western Canada will showcase evolved branding, product offering and customer marketing to reflect the Company's learnings in Ontario. A number of locations will provide an enhanced ethnic offering that has been successfully introduced in the Ontario market.

"This expansion is one piece of a comprehensive strategy to execute the transformation of our company through Project Sunrise, greatly improve our conventional offering, bolster our brand and grow our industry leading market share in ecommerce," continued Mr. Medline.

In the fourth quarter of fiscal 2017, the Company launched Project Sunrise, a comprehensive three year transformation intended to simplify the organizational structure and reduce costs. The transformation is expected to result in approximately $500 million in annualized cost savings by fiscal 2020.

Empire has not to this point identified which British Columbia markets will be turned into FreshCo locations, nor have they expanded on what kind of timeline that changeover will require.

All of which means that for now, Prince Rupert will continue to be a Safeway town, until we hear otherwise and Empire provides more details on their plans for their British Columbia stores.

Terrace and Smithers are also home to a Canada Safeway locations in Northwest British Columbia.

The FreshCo concept was first introduced in Ontario in the Spring of 2010, the notes below provide a glimpse of what that shopping option could look like once it arrives in British Columbia.

More on the FreshCo brand can be explored here. 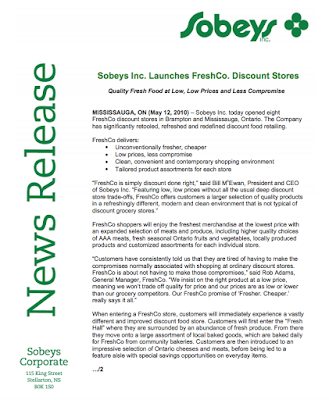 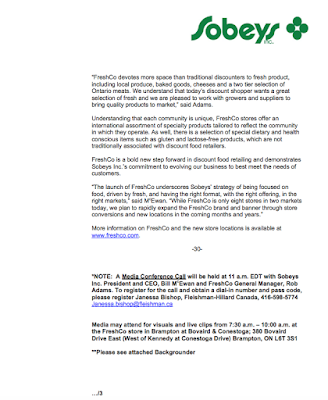 Empire Foods has found a number of challenges along the way since it purchased the Canada Safeway assets back in 2013, with supply chain issues and corporate integration among some of the areas that the company has had to address over the last few years.

Still to be heard from when it comes to their plans for the FreshCo expansion into British Columbia, is the UFCW, the union which represents workers in the grocery store industry in the province. That organization will be waiting with interest to see which stores will be targeted for the change over and how that may impact on their membership.

Some background on Wednesday's announcement can be found below.

For more items related to the Northwest Commercial scene see our archive page here.
Posted by . at 10:23 AM

Email ThisBlogThis!Share to TwitterShare to FacebookShare to Pinterest
Labels: Empire foods to introduce FreshCo brand to BC