The woods come alive on the Lester Centre stage tonight for Charles Hays students, with debut of Into the Woods 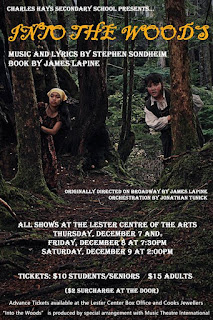 Three months of rehearsals and set preparation, as well as the last minute rush to the stage of the last few weeks comes together tonight, as Charles Hays Secondary presents this years Musical presentation of Into the Woods.

Through the fall Alison O'Toole from the CHSS drama department has kept the cast and crew on message towards tonight's Opening Night with the 7:30 curtain call putting all of those long nights and hard work on display for three shows.

The play which is produced by special arrangement with Music Theatre International, marks the latest challenge for the School's talented acting community and marks one of the most popular of community events of the holiday season.

The play is described as a modern twist on several of the Brothers Grimm Fairy Tales and features the adaptation of the fairy tales by James Lapine to go along with the music of Stephen Sondheim.

The story was also turned into a motion picture, released in 2014

In addition to a cast and technical crew dedicated to putting on a high level performance, the evening features the musical work of the Charles Hays Music Department, who will be carrying the bulk of the musical load from the Sondheim songbook to provide the right notes to go with the dramatic and light hearted moments. 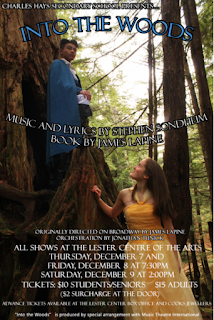 Putting the show together is a large scale effort that also involves students in the school's art department who have created many of the set elements, as well as a core group of volunteers have helped to set things up on the Lester Stage to set the mood of the woods for the three night's journey.

All of it reaches the finish line tonight at 7:30 as Night number one takes the project live to the crowd.

Show time Friday is at 7:30 PM as well, with a Saturday afternoon performance set  to start at 2 PM.

Advance Tickets are available at the Lester Centre Box Office and Cooks Jewellers  for 10 dollars for Students and Seniors and $15 for Adults.

If you wait until showtime to grab a ticket, you can add two dollars to the charge for the at the door surcharge.

You might be able to track some of the opening night preparations through the CHSS Twitter feed tonight as well as through the run of the production to Saturday.

You can find more items of interest on Community events in Prince Rupert from our archive page.

Email ThisBlogThis!Share to TwitterShare to FacebookShare to Pinterest
Labels: CHSS presents Into the Woods