Things have picked up a bit form our last trip down to the Atlin Terminal parking lot, where we had noted that the progress of the community space plans had slowed somewhat over the last few months.

However, since our update of November, some new features have become part of the scenery in the re-purposed parking lot, with some covered shelters installed in the community space area of the project, including one which now boasts of a sheltered spot to lock up your bike if you are cycling around the Cow Bay area. 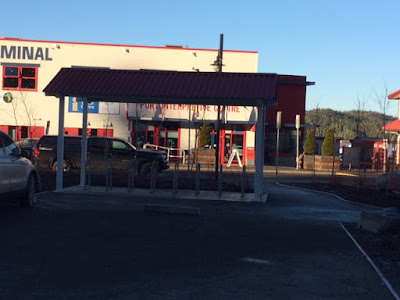 The main stage feature of the project however, while now hosting a roof, still remains blocked off, leaving the opening for sometime in 2018 it would seem. 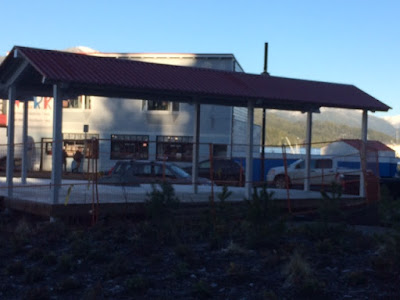 The Port of Prince Rupert hasn't had much to say of late when it comes to many of the expansion plans that were in the works for the Cow Bay waterfront area, you can review what some of the original designs and plans called for from this item from May of 2016.

For more notes related to Port Development in the city see our archive page here.
Posted by . at 3:49 PM