More accolades for Port of Prince Rupert, as Journal of Commerce rates them Top Performing Port

It was another successful trip to a trade event for representatives of the Port of Prince Rupert as Port officials received a salute from the organizers of the Journal of Commerce Port Performance North America conference earlier this month.

The Prince Rupert delegation were in attendance for the two day conference on December 12 and 13 in Newark, New Jersey, with port officials engaged in a number of sessions related to theme for the 2017 gathering of 'Improving Port Performance amid a sea of Disruption"

While taking part in the conference, the Port was recognized as an industry leader and named a Top Performing Port by the influential shipping industry magazine, with the Port celebrating their success with recognition of the partnership between CN Rail and DP world to achieve the standards that put the Port in the spotlight at the event. 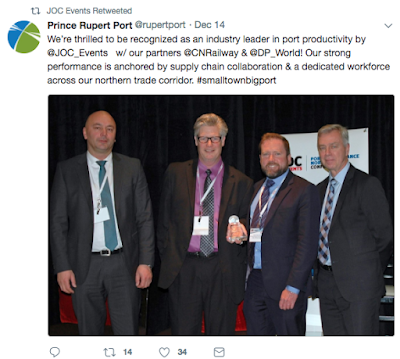 The Port also paid tribute to those working the docks at the Fairview Facility, noting that through their efforts Prince Rupert was providing an industry leading service and gaining global recognition.

CN Rail and DP World were also quick to their twitter feed to celebrate the success of the Port and to highlight the supply chain advantage that Prince Rupert has to offer to the global shipping industry. 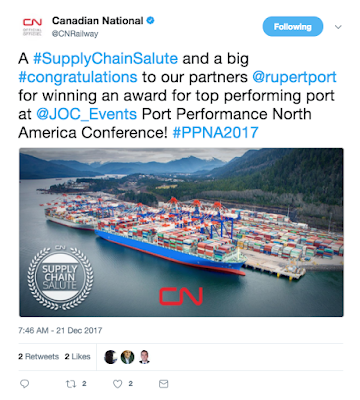 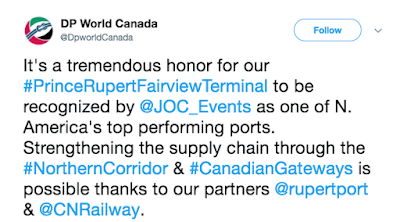 The success in Newark may herald even better news to come for the year ahead for the Port.

In the JOC rankings for the year ending 2016, the Port of Prince Rupert had cracked the Top 25 in North America, holding down the 16th spot and closing in fast on Montreal, with Vancouver still the top Canadian port on the list. 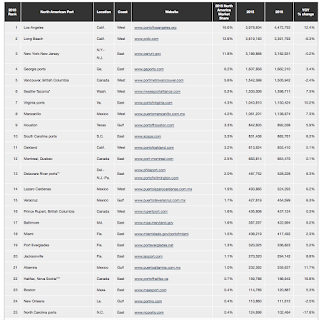 Those results could change significantly once the 2017 numbers are tabulated, with increased capacity and shipments through the Prince Rupert gateway as this year comes to an end, the prospect of jumping over the Montreal facility would seem close at hand and with it the potential to enter the Top Ten listings of port facilities in North America as we head into 2018.

A recent report from the Port of Prince Rupert highlighted the economic impact that port operations have on the entire Highway 16 corridor from Prince Rupert through to Prince George, with prospects for continue growth in the year ahead, that economic footprint will continue spread and create jobs across the region.

You can learn more about the operations of the Port of Prince Rupert from our archive page here.