The consortium of groups led by Thirty Five First Nations that is looking to build a bitumen pipeline from Fort McMurray to just north of Lax Kw'alaams has ramped up the profile building for their proposed development, offering up the bold declaration as to how the Eagle Spirit Energy pipeline project will be the Cleanest Energy Project on the planet.

The positioning claim came in a media release from earlier this week from Eagle Spirit Chairman and CEO Calvin Helin, who outlined the oversight process in place for the proposed pipeline development. 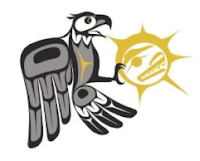 "The Chiefs Council provided strict guidelines to develop the greenest possible corridor with the highest level of protection to traditional territories.

Firstly, ESE will utilize green hydro energy for all power requirements in the corridor.

Secondly, ESE has developed the most robust spill prevention model in the world—one that, exceeds the current minimal standards of the federal Oceans Protection Plan.

Lastly, we will seek best-in-class technologies such as that of RII to produce Canadian oil with the lowest GHG footprint on the planet."

The apparent process that the Eagle Spirit project would make use of has been developed by a company called R.I.I. North America, which Eagle Spirit has partnered with on the pipeline plan.

According to Mr. Helin's update:

There was however no additional information provided as part of the media release to explain how the proposed project will meet such a lofty benchmark, nor comparisons with other projects around the world which could be used as a comparison.

Further notes on the range of technology that RII has developed can be reviewed here.

Eagle Spirit has also not to this point, hosted any form of public information session in Prince Rupert to share their plans with the regional community and outline how the company envisions the pipeline and terminal development coming together on the North Coast.

As part of their same announcement this week, Eagle Spirit also outlined how it has secured an off take commitment from a major national oil company (not named in the media release) to receive partially upgraded bitumen from the Eagle Spirit pipeline and shipping terminal projects.

This has the advantage that only one pipeline is required but delivers a larger volume (60% more pipeline capacity) of a readily shippable and highly marketable product for which Brent Crude pricing can be received.

You can review more on the Eagle Spirit announcement here.

The prospect of shipments out of Grassy Point however, is not something that has been approved or even considered much to this point and how the Eagle Spirit plans will fit in with the Federal Governments environmental plans remains to be seen.

The Lax Kw'alaams however have set in motion some legal procedures related to resource development, with the Band filing its court claim back in March against the Federal government's oil tanker ban.

There has so far, been no update provided on the progress of that legal quest.

Last week, Prime Minister Trudeau was in Prince Rupert announcing the signing of an agreement on Oceans Protection between the Federal Government and fourteen Coastal First Nations including the government of Lax Kw'alaams. 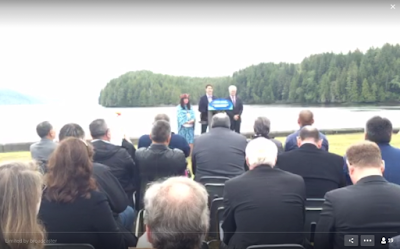 In his comments of last Thursday, Mr. Trudeau made note of the progress of Bill C48 and the Liberal's plans for an oil tanker moratorium and how the Great Bear Rain forest is no place for tankers.

"I have said for an awfully long time that the Great Bear Rain forest is no place for crude oil tankers, this is something that I've understood deeply, this something that I certainly saw and felt deeply in 2014 when I was here visiting Hartley Bay, visiting Rupert, visiting Kitimat ...

The understanding of how important it is to make sure that we are protecting this area, the Great Bear Rainforest and the Great Bear Sea for future generations.

But I also know there are people who are concerned and rightly so, about the future of their economies, of their communities, of the opportunities that their citizens will have.

With those words in mind, how the Eagle Spirit proposal may fit into the Government's Oceans Protection Plan will make for some interesting study and commentary from all quarters as the months move forward.

You can review more background on the Eagle Spirit Plans from our archive page here.


To return to the most recent blog posting of the day, click here.
Posted by . at 4:28 PM