Plans for Waterfront eyesore on the mind of Councillor Cunningham


It's a building that has heritage status, was once the centrepiece of transportation for the North Coast and now sits on the waterfront in continued disrepair; for the most part, serving as a squatters condo for pigeons and other forms of wildlife.

The Old VIA/CN Railway building which has often been promoted as a future home for everything from restaurants to office space and potential residences, continues to stand as an eyesore, a photo backdrop for tourists and locals alike, but perhaps one that is not putting the community in the best light.

Councillor Barry Cunningham has once again raised the issue of the derelict structure that once housed passenger railway operations in the community, asking a few questions in Council on the fate of the building nestled close to Prince Rupert Harbour at the Rotary waterfront park.

At Monday night's council session the  councillor inquired about the status of the building, noting that he had been contacted by a local realtor who had expressed interest in the building but had not as of yet, had return contact from anyone at City Hall.

As he looked to have something done about the historical building. Mr. Cunningham observed that the continued state of disrepair for the building is almost to the point where the building may have to be torn down.

"While I was down on the waterfront on Sunday, I took a look at the VIA building there ... it's in deplorable state , but I also learned today that there has been an inquiry about buying it by one of the real estate agents in town and no one at City Hall has got back to her. If that's slipped through the cracks, or something I would like to see it addressed if possible, because it would really be nice to find an investor for it and have it fixed up." 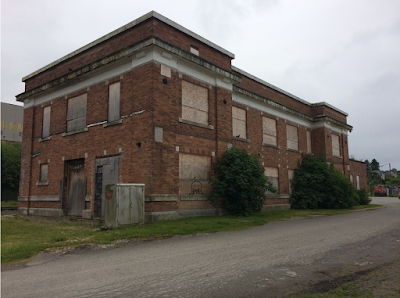 Back in February of 2017, the City of Prince Rupert had announced plans to apply for a provincial grant that would allow for studies on the state of the old CN/VIA rail station, though no further updates were released by Council following those applications in order to chart the progress of those plans for the public.

Some notes on the recent themes of the waterfront location can be found below.

Mr. Cunningham has made the need for attention on derelict buildings a frequent topic for City Council over the last four years, however when it comes to taking action on those buildings in questions, the process remains something that has yet to be fully addressed.

Further items of interest on derelict buildings in the community can also be reviewed below:

March 2018 -- Councillor Cunningham looks to property tax solution to issue of derelict and unsightly properties
March 2018 -- Observations on state of downtown and business climate spur on line discussions
August 2017 -- Councillor Cunningham keeps heat on City Council over condition of downtown buildings
May 2017 -- Few options available to council to force Clean Up of downtown eyesores
February 2017 -- A not so inviting vision for tourists, or would be investors to be found in downtown area

You can review the discussion on the theme of the waterfront building from the City's Video Archive, starting at the one hour, sixteen minute mark.

More items of interest from Monday's City Council session can be found from our Council Timeline and Council Archive page.

A wider overview of City Council discussion topics can be found from our Council Discussion archive.

To return to the most recent blog posting of the day, click here.
Posted by . at 9:06 AM

Email ThisBlogThis!Share to TwitterShare to FacebookShare to Pinterest
Labels: Old Via rail station