The nature of British Columbia's Salmon Farming industry is set for a significant shift in four years, as the NDP government of Premier Horgan establishes a regimen of new rules when it comes time for salmon farm renewals.

The change in approach towards Fish Farms was announced Wednesday, with the new rules created to address the growing focus that the provincial government has put on the state of Wild Salmon stocks in British Columbia waters.

The four year lead up period was chosen as that is the year which aligns with a substantial number of the existing fish licences that are set to expire. The 96 months will also provide fish farm operators time to adapt their operations to the requirements of DFO and to strengthen their relationships with First Nations.

Currently there are 120 finfish aquaculture tenures in British Columbia, 95 of those DFO fish licences will expire in 2022 alone.

Tenures expiring before 2022 will be addressed on a month to month review basis.

Lana Popham,British Columbia's Minister of Agriculture which oversees aquaculture in the province noted that the new approach has been long overdue and is designed as part of the province's commitment to reconciliation.

“The challenges facing our wild salmon have been ignored for far too long,”  ... “That’s why we are putting in place a new approach to provide clarity and outline our expectations moving forward for a sustainable industry that protects wild salmon, embraces reconciliation, and provides good jobs.”

Locally, North Coast MLA Jennifer Rice hailed the provincial move, noting that it was the issue of Fish Farms in British Columbia that was one of the areas which propelled her into politics. 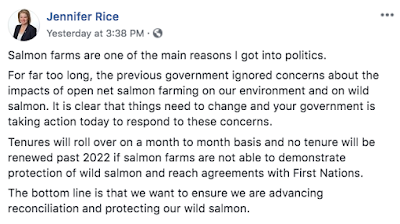 More background on the provincial announcement can be found here.

Reaction to the new approach by the province has created for a mix of opinion and commentary, environmentalists while praising the decision, lamented the lengthy amount of time to implement the program.

The Green Party called the program something that was too little, too late, adding that they would have offered but 20 months for fish farm operators to harvest their existing smolts and then to decommission  their sites.

The Opposition Liberals suggested that it was a case of the NDP following through on its threats towards fish farm operators and is a program which is sending the wrong message about stability in the province.

Skeena MLA Ellis Ross, who is the BC Liberal critic for Resource Opportunities noted "that the NDP continues to ignore the thousands of Indigenous people in B.C. who are employed by the resource sector and who say responsible development brings immense benefits to their communities."

Ross further observed as to what the BC Liberal approach to the issue was.

“We believe consultation with Indigenous communities is essential and we also believe that each nation has the right to create jobs for their people,” ...  “ Today’s announcement simply reiterates to Indigenous people in B.C. that the status quo will remain in place for them, and that politics is more important than lifting people out of poverty through good jobs and access to opportunity.”


Other stakeholders and observers made note that much of the consultation aspect of the new requirements is rather vague, with no detailed explanation as to what conditions may be considered as consent, as well as to whether the move in effect provides First Nations with a veto over any future development and how mixed opinions in those communities may be addressed.

The BC Salmon Farmers Association took note of what they called a significant policy shift by the province and expressed concern over of the lack of consultation that was offered to them when it comes to the new regulations,

“We have just received this decision and are still reviewing it,” ... “The change in consultation requirements appears to be significant. We haven’t been involved in discussions about this change nor asked for any feedback on how it might impact our members, so need some time to consider it before commenting further.” -- BCSFA spokesperson Shawn Hall.

Some in the BC business community also suggest that the NDP moves will create a level of uncertainty for the industry and could very well lead to its eventual closure.

A review of some of the current of conversation on the fish farm changes can be found below:

For more items of interest on the fishing industry on the North Coast and in BC see our archive page here.

Update:  Late Friday Afternoon, Agriculture Minister Lana Popham offered up some additional information, responding to some of the commentary that she has received from the announcement of earlier this week.