If we build it, they will cycle ... Complete Streets for Prince Rupert releases findings from Seafest survey 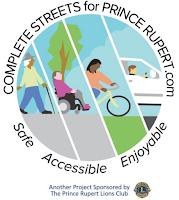 A recent survey from Complete Streets for Prince Rupert has provided for some interesting notes on how Rupertites travel around their city and what may be on their wish list to help reduce interactions with traffic on city streets.

The local group which hosted an information tent at this years Waterfront events during Seafest has tabulated the findings from the Seafest Survey which asked two questions of those stopping by:

How do you usually get downtown? (Drive, Walk, Bicycle, Bus Taxi, Mobility Aid or Other)

A total of 99 participants took the survey and the opportunity to win a pair of children's bicycles donated by Chucky's Cycle Shop in Prince Rupert.

When it comes to getting around the vast majority of residents rely on the automobile, with close to 60 percent citing a car or truck as the most often used mode of transportation, followed by walking at near 30 percent and close to nine percent who ride a bike. 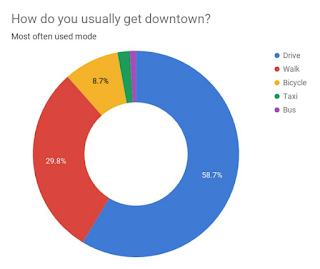 However, some of that ratio could change if the City were to follow up on some recommendations from those who took the survey, with 29 respondents calling for protected bike paths in the city, while 22 respondents want the city to improve the sidewalk infrastructure in the community. 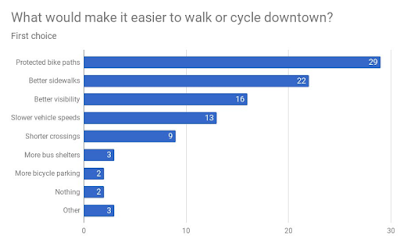 The two findings made for the main push for the Complete Streets review, which offered up some background on how change could shift Rupertites to the bike path or the sidewalks of the city for their transportation planning.

Choosing not to build safer infrastructure for cycling on the grounds that so few people use bicycles is a self-fulfilling prophecy. This attitude discourages the use of bicycles and ignores the reality that many people will choose a bicycle as a mode of transportation when they feel it is safe to do so.

Building better sidewalks with wheelchair dips was the runner up after protected bicycle paths. Some people who chose this safety strategy mentioned how difficult it is to access sidewalks while pushing a baby stroller or using a wheelchair because wheelchair dips are not available or are inaccessible.

Improving visibility and making changes to road infrastructure also made for some of the recommendations from their report.

People’s most popular second choice for making it easier to walk and cycle downtown was better visibility. Many drivers reported that vehicles parked (legally) close to crosswalks make it difficult to see pedestrians waiting to cross the street.

Similarly, many walkers mentioned how difficult it is to see around vehicles parked close to the crosswalk. Curb extensions reduce pedestrian-related crashes because they improve visibility for walkers and drivers, they make crossings shorter and they reduce vehicle speeds. Curb extensions on key crossings would address several popular wishes from the survey. 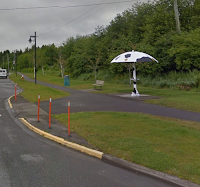 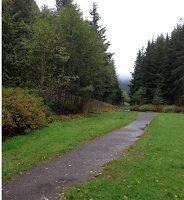 Creating dedicated bike lanes similar to the walking path along dry dock road or through the McClymont park area and introducing more traffic calming measures are among some of the findings from the Complete Streets Survey from Seafest.

You can review the full report form Complete Streets here.