Prime Minister Justin Trudeau has Prince Rupert on his travel itinerary for Thursday morning, though whether he has plans to venture much further than the Seal Cove Coast Guard base has not been revealed.

The official itinerary from the Prime Minister's office has Mr. Trudeau at the Seal Cove Coast Guard facility for a 9:45 AM announcement with local First Nations leaders, the nature of which remains a closely guarded secret among the principles to the event. 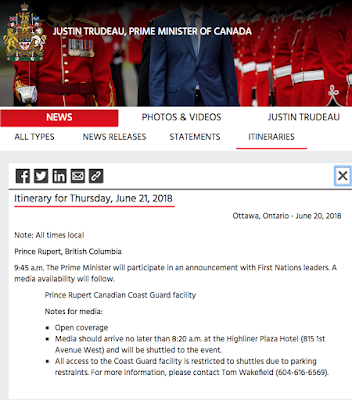 Following Thursday's announcement a media availability has been scheduled, which may give local accredited reporters a chance to ask a question of the nation's leader, giving them less than sixteen hours to work out their best theme.

Such is the nature of the visit and the limited parking space at the facility, that the media will be shuttled to the Coast Base by bus departing the Highliner Inn, with reporters advised to be at the hotel no later than 8:20 AM.

The location of the event suggests that the theme of the announcement could be related to the Federal government's environmental plans for oil tankers along the North Coast with the Tanker Ban having cleared the House of Commons in May, if so that could make for an interesting experience, considering how the Lax Kw'alaams Band currently has a court case in motion related to the ban.

The topic could be an announcement related to the  further advancement of the Federal Government's Ocean Protection plan and the installation of one of the expanded Indigenous Response teams that will be placed along the British Columbia coast.

Then again it could be pretty well anything, perhaps we'll all just have to patiently await word from Seal Cove as to the purpose of the visit.

Joining the Prime Minister for Thursday's visit will be Transport Minister Marc Garneau, who gave the heads up through twitter on Wednesday.

No other details have been released about Thursday's visit and to this point it is the only item listed on his official itinerary for the day, with no indication if a drive into the city is part of the travel day for Mr. Trudeau, or if he plans to follow the lead of the Premier of British Columbia and take in a tour of the city's beverage houses.


To return to the most recent blog posting of the day, click here.
Posted by . at 4:15 PM