How the City of Prince Rupert uses its bylaw on Vehicle For Hire procedures is up for a change, as City Council prepares to review a plan to amend the current bylaw that will extend Chauffeur's Permits from the current one year period, to a two year term between permit renewals.

A move that for the most part will have the largest impact on the city's taxi providers, the largest of which is Skeena Taxi.

Council first introduced the proposed changes on June 11th, with the Final reading of the Bylaw amendment set for the July 23rd Council meeting.

During the discussion of June 11th, the city's corporate administrator Rory Mandryk noted that the proposed change would bring Prince Rupert in line with most of the communities in the province which have adopted the two year term.

He also advised that both the RCMP and Skeena Taxi had approved of the proposed change.

The main focus of the proposed change is to provide for cost savings for the recipients of the permits and to free up Administration staff time at the local detachment.

As part of the lead up to that July Council session, the city has issued a call for anyone that may be affected by the Bylaw to submit their concerns or comments to the City by Friday July 20th at 4:30 PM.

Though if they are looking for some extensive feedback on that call for comments, they aren't exactly shouting it out from the top of City Hall.

So far the only indication that the public has a role to play in the overview of the Bylaw change has come from a pair of public notices provided to the back pages of the weekly newspaper over the last two weeks, something required as part of the municipal notification process.

However, despite a growing range of communication options available to the City, the notice of opportunity to comment or raise concerns on the topic of the city's taxi system has not made it to any of the civic information projects.

Something which may have some impact as to how much of a contribution from the public that the city will receive on the topic.

To this point, the notice to the public is not listed on the City Website, Facebook pages, twitter feed or the new application for phones and other mobile devices recently created to share information.

Considering the range of communication forums that have been created by the City over the last few years, one might think that the Council would want to make as much use as possible of all of them.

Taking advantage  of those options in order to share word of their plans and community engagement opportunities, as well as towards their goals of transparency and accountability.

The bylaw change is an amendment to the original bylaw which you can review here.

The Report to Council can be reviewed below: 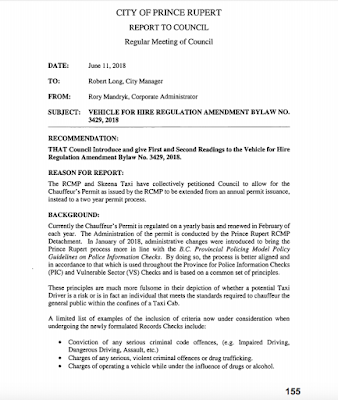 The proposed changes can be examined as part of the Agenda package from the June 11th Concil session, starting on Page 155.