The first of three cruise ship port calls for June arrived in Prince Rupert harbour this morning as the Seabourn Sojourn pulled up alongside the Northland Cruise Terminal at 8AM, its passengers taking to the streets of Prince Rupert shortly after to explore what Prince Rupert and the region has to offer.

The ten hour port call, could deliver up to 450 travellers to the community, with many taking advantage of the range of bus tours and other options that are offered to Prince Rupert's visitors on cruise ship day. 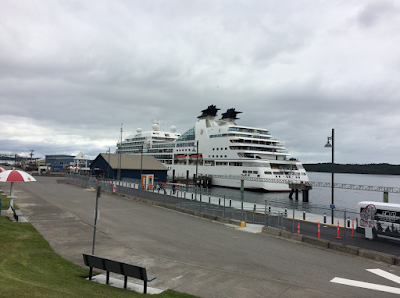 Today's visit by the Sojourn marks its fist port call of the year for the Seabourn line vessel, in total Prince Rupert's port watchers will see the vessel call on the city six times, with its final visit of the year bringing the 2018 season to tan end on October 4th.

Also on the waterfront today, was an example of the kind of luxury yachts that the City of Prince Rupert is hoping to attract to the Cow Bay Dock, with the Sarah Lissa tied up at one of the inside berths of the Cow Bay main dock.

The vessel is the largest of the three vessels tied up to the main dock today, the 28 metre vessel which was built by Aleutian yachts in the United States, it is registered in the Marshall Islands. It has accommodation for eight people and a crew of two.

Its recent itinerary has taken it through the Inside Passage first from Victoria, with  stops in Nanaimo, Campbell River and Shearwater prior to its arrival in Prince Rupert. 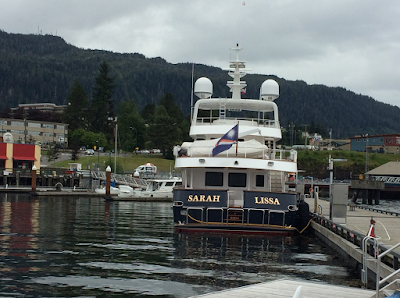 In May,  Marina Manager Robin Beattie provided City Council with a preview of this years plans for the Cow Bay Dock,  noting at the time that spaces were filling up fast for July and that his impression is that the Marina will do better this cruise ship year, than it did last year.

You can review more items of note on Prince Rupert's Cruise industry from our archive page here.
Posted by . at 4:04 PM