A passenger from the cruise vessel Norwegian Jewel is spending some time in the care of a Nanaimo hospital after a medical emergency at sea brought units from the Joint Rescue Coordination Centre to the waters between Haida Gwaii and Vancouver Island earlier this week.

The incident which took place on Tuesday, had the Victoria based communication centre send a CC 115 Buffalo aircraft and CH 149 Cormorant Helicopter both from 442 Squadron at CFB Comox to the area to respond to the emergency call.

Upon arrival the Cormorant delivered SAR technicians to the cruise ship and hoisted the stricken patient up to the helicopter, then transporting the passenger and a nurse from the vessel to a medical facility at Comox.

The patient was then taken to hospital in Nanaimo, no further details related to the patients condition were released. 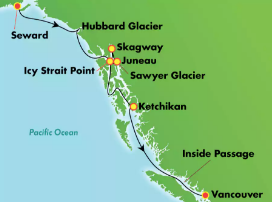 The Norwegian Jewel is currently on a transit at Glacier Bay, Alaska as part of its Alaska cruise schedule cycle, the medical emergency took part as it was making its northward journey near Haida Gwaii.

For more items of note about Emergency responders in the Northwest see our archive page here.
Posted by . at 2:33 PM