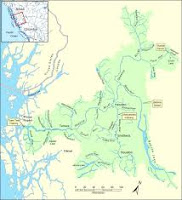 In an announcement released today, the collective declared that they are standing together in a call to close the freshwater and marine recreational fisheries, opposing recent actions taken by DFO and the Province.

Their  decision came after they had received the work and recommendations of the Skeena First Nations Technical committee,  which had developed fishing plan recommendations for the recreational and commercial fisheries intended to protect Skeena Chinook.

The organization had requested that DFO follow those recommendations on the impact on Skeena Chinook, which included a recommendation for no catch and release option, advice that the Skeena group says DFO and the Province of British Columbia did not accept.

“We oppose the actions of DFO allowing the recreational fishery to harvest Chinook in this salmon crisis, and BC issuing guide outfitter permits and individual licenses to allow the recreational steelhead catch and release fishery to remain open,” ...  “If Canada and BC are serious about their commitments to Indigenous Peoples, then the Skeena watershed and marine waters should be closed to all recreational salmon fishing for the 2018 season.” -- Bruce Watkinson, Co-Chair of the Skeena Nations Fish Secretariat.

In a media release from Tuesday the Skeena Nations noted how they believe that the actions of DFO have appeased the recreational fishery, but have failed to live up to DFO's obligations to protect the Skeena fishery and the interests of First Nations.

"The Skeena Nations support conservation, however our Constitutional Aboriginal rights must be recognized and respected – to ensure this, we will engage in a collaborative process and dialogue with DFO and BC.”

For more background on fishery issues on the North Coast and across the Northwest see our archive page here.

To return to the most recent blog posting of the day, click here.
Posted by . at 3:31 PM

Email ThisBlogThis!Share to TwitterShare to FacebookShare to Pinterest
Labels: Skeena First Nations call for prohibition on all recreation and sport fisheries