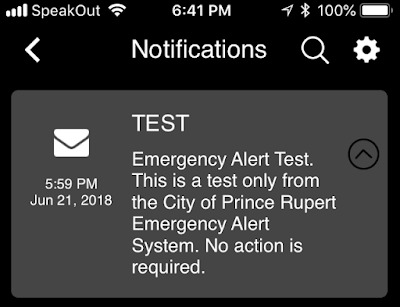 The dinner hour of Thursday put the city's emergency notification system to the test,  with the new alert program sending out a short message to the mobile devices of those residents who have signed up to receive the program.

Had there been an actual emergency situation to alert the public about, the message would have included directions on what actions to take and where to access further information.

The most recent update on the number of those in the community that have subscribed to the city's alert system was listed as 500 residents, which is not a particularly strong participation level for a city over just over 11,000.

The alert system was introduced partly as a response to the concern from the public over the level of information that was made available following the January Tsunami alert in the aftermath of a large earthquake near Kodiak Alaska.

This week's test  took place  days after residents should have received an information flyer from the City related to Tsunami Emergency Preparedness, more on that information stream from the City can be found here.

Those that have yet to register for the city's alert program can do so by logging onto the city website or accessing the app through the online App Store or Google Play store.

More items of note related to the City of Prince Rupert can be found here.

To return to the most recent blog posting of the day, click here.
Posted by . at 9:14 AM