The path towards the much anticipated BC Housing supportive Housing project on Park Avenue will take a significant step forward tonight,  as City Council gives consideration to the Development Permit Application.

Some background for Council members is included in a report from City Planner Zeno Krekic, who provides some history to towards the decision to build the 36 unit residence at the west side site located on a lot at 1450 Park Avenue, adjacent to the current location for the Transition House Society.

As part of the consultation process, the City received comment from the Ministry of Transportation related to the property which will access Highway 16 as part of Park Avenue, among the concerns from the Skeena District office in Terrace were:

The need for the construction work to be ware of drainage, catch basins and current light standard installations in place.

In his introductory notes, Mr. Zeno had noted that when it comes to parking, the City had taken into account that the residence is designed for the homeless, or those in peril of becoming homeless, with parking requirements listed at a ratio of 1 parking spot per each 3 units of the complex.

Should BC Housing change the use of the building that will require extra parking, the delivery of those parking spaces will be the responsibility of BC Housing.

Included in the report were a number of drawings and floor plans that outline the scope of the project, which if permits are provided for, is expected to get underway this summer.

Horizon North has been selected as the builder of the Modular homes for the Park Avenue location.

The company which first arrived on the scene in the anticipation of the then LNG boom period, provides for work camp housing among its many elements.

It had been previously mentioned in City Council discussions for what would be an ambitious redevelopment of the Wantage Road land that once was the city's garbage dump.

The most recently were involved in the construction of a supportive housing project underway in the Kelowna area. 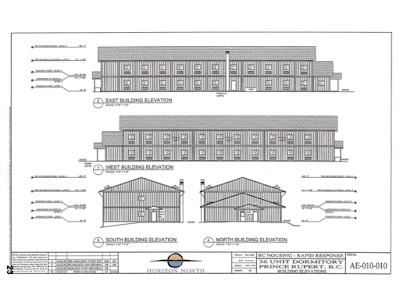 More background on the project can be reviewed from the City Council Regular Council Agenda Package for this evening, starting at page 8.

Some of our background on the process towards the Park Avenue project can be found below:

March 22 -- Prince Rupert's Third Avenue Extreme Weather Shelter extends service until end of May
March 16 -- As we cross mid-March, still no updates on status of much anticipated modular homes promised for delivery this month

Further background on housing issues in the Northwest can be found here.