Regional District officials reviewed their final Financial numbers for  2017 in mid June, receiving and making public a range of material related to District expenses, salary compensation and supplier purchases for the last year.

Among the reports received, the annual Statement of Financial Information was provided for review, and as was the case with the City of Prince Rupert SOFI release, the document makes note of the compensation for the elected officials who served on the North Coast Regional District in 2017. 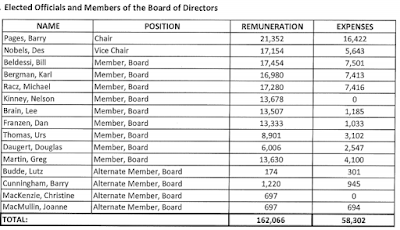 Included on the list was Prince Rupert Mayor Lee Brain, who collected an additional 13,507 in compensation for his work with the Regional Body, claiming expenses of 1,185 dollars.

The Regional District compensation, combined with his Prince Rupert SOFI review of $61,300 in salary and expenses of $17,892 places Mr. Brain at the top of the salary listings for elected municipal or regional officials on the North Coast.

With Mr. Brain having received total compensation of 74,807 and claiming expenses of 19,077 for his public work as both Mayor of the City of Prince Rupert and Member of the Board for Regional District.

The combination of Remuneration, Taxable Benefits and Expenses for those duties totals $93,884.

Also on the list representing Prince Rupert were the late Nelson Kinney who collected 13,678 as a Director with Regional District, he claimed no expenses in 2017.

Councillor Barry Cunningham also represented Prince Rupert, he received 1,220 is salary and claimed 945 in expenses for his Regional District work in 2017.

That financial credit is about to come to an end at the end of this year, as Revenue Canada changes the way it provides such benefits at tax time.

That group was led by Doug Chapman, who collected $145,118 and claimed 10,836 in expenses for his Chief Administrative Officer duties in 2017.

Fifteen suppliers were included in the list of those who provided supplies or services to the District over the total of 25,000 dollars in 2017. 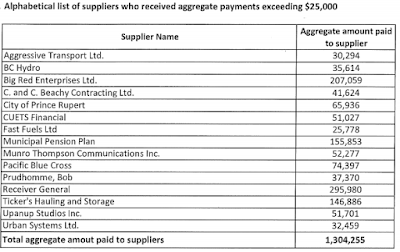 The full report was delivered to Regional District members at their June 15th District meeting in Oona River.  The full document can be reviewed from the Agenda Package of that meeting.