When it came to the actual review of Port functions at Tuesday's Annual Public Meeting the facts and figures notes were delivered by Joe Rektor who has served as the Interim President and CEO after the departure of Don Krusel who stepped down in September of 2017.

In is opening remarks, Mr. Rektor made note of the size of the crowd in attendance, observing as to the strong interest that the Port and its operations generates in the community.

As for the statistical review, the Interim CEO offered up a range of charts and observations that  provided for some of the highlights of the year just passed and put into context the impact that the port has on the local economy.

Through 2017 the Port through its various terminals delivered volumes of over 24 million tonnes, a record number and a twenty eight percent increase from the year before. 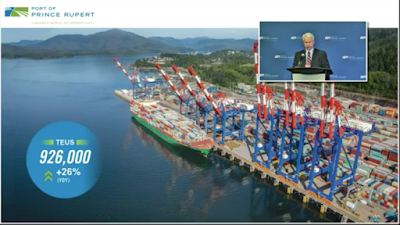 The largest story from last year was the completion of the Fairview Terminal Expansion which increased capacity and increased volumes by 26 percent to 926,000 TEU's, with Mr. Rektor noting that with the further expansion plans ahead  that success will continue to grow. 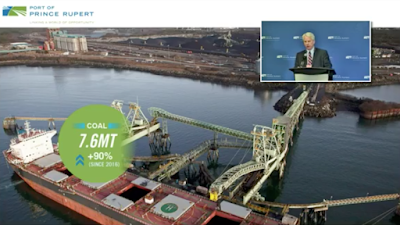 Thanks to the reopening of coal facilities in the Northeast, Coal also saw some significant recovery in shipment levels, with Ridley Terminals nearly doubling its volume last year increasing by 3.5 million tonnes  and finding a 90 percent improvement since 2016. 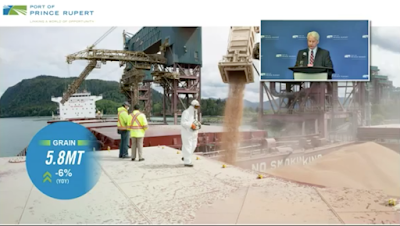 Prince Rupert Grain saw some volume declines for the last year, but still had its fourth best year on record and remains well positioned to deliver grain products to the world. 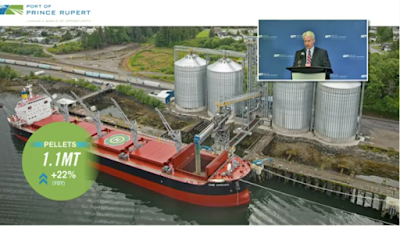 Westview Terminal grew it's volumes by 22 percent to almost 1.1 million tonnes making for good news for the BC forestry industry and adds additional markets for their products. 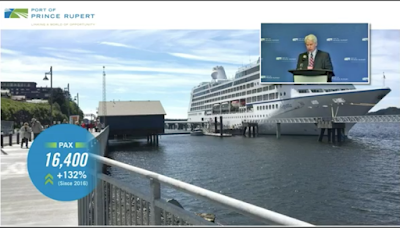 The Cruise industry continues to rebound with a 132 percent increase since 2016, bringing 16,400 passengers to the community, with the Interim CEO noting that the Port's new niche focus will continue to bring visitors to the community.

The Visitor Information Centre which is located at the Atlin Terminal saw over 22,000 visitors check in during the course of 2017.

The Economic impact of the Port operations on the North Coast places it as the third largest in value for ports in the nation, with over 1 billion dollars in economic activity created and significant tax revenue to 112 million dollars delivered to all levels of government and communities across Northern British Columbia. 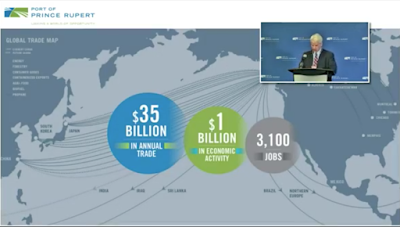 Overall in Northern British Columbia, over 3,100 direct jobs are in place, with over 5,200 jobs in Northern BC services related to port activities.

In addition to the growth in employment, the review included a look at the increased engagement of local First Nations, both when it comes to consultation as well as through port operations and contract opportunities that have been realized as part of that ongoing relationship. 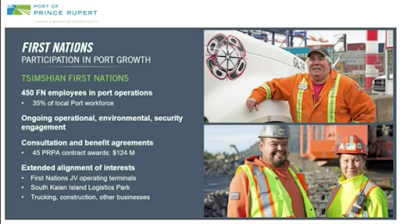 The completion of the Security and Port Operations facility and a range of environmental initiatives were among the elements noted on the evening, as well as the introduction of transit guidelines and incentives for shipping lines that call on the Port.

Community involvement and community investment also gained a review over the course of the presentation. With such works as the Rushbrook Trail project and ongoing work at North Pacific highlighted as well as a number of financial donations for local groups and organizations.

Over the last nine years the Port's financial contributions to the community have come to 9.25 million dollars in 65 different projects.

As part of Tuesday's financial review it was announced that for 2018, the Port will be delivering an additional  1.5 million dollars into the fund for community use. 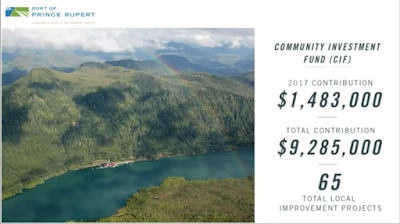 Mr. Rektor's Financial review also provided a glimpse into the scope of the economic force that the Port has become across Northern British Columbia and as part of Canada's international trade strategy.

From the Review the Interim CEO noted that Revenue was reported as down about four percent from 2016, with Expenses having increased by 11 percent and Operating Income declining by 26 percent from the year before.

When it comes to Expenses, the Port had realized a reduced Federal stipend for 2017, and of note for municipal leaders, the report observed that the Port had paid 10 percent more on Payments in lieu of municipal taxes or PILT payments.

The growth of port operations was reflected in the salaries and benefits review, which noted that those numbers had increased by 22 percent in 2017. 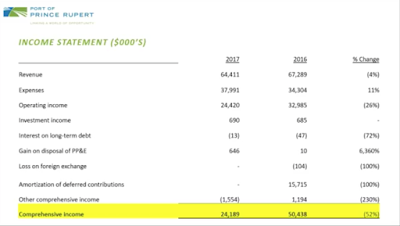 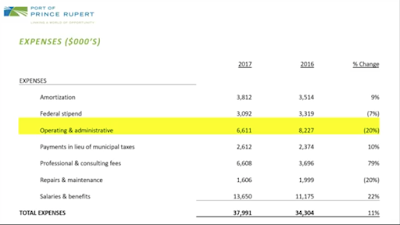 Among some of the other notes, the Port is now considered debt free with the Long Term Debt extinguished after its four year run, while total assets of the Port were up by 9 percent in 2017.

The growth of the Port and where it sits in the scope of Canadian shipping, made note that while operating with one of the smallest population bases in the nation, the Port of Prince Rupert is among the top five in tonnage in the nation, while in Revenues, Prince Rupert trails only Vancouver and Montreal. 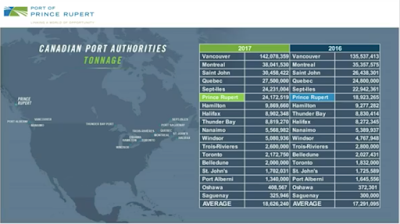 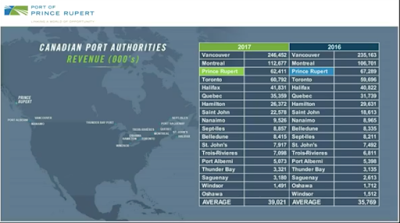 When it comes to net income the Port is now listed as third overall, trailing Vancouver and Toronto.

Though those findings were delivered with an important caveat, that being a real estate transaction in the Ontario capital delivered significant return for the Port in that city.

The cash windfall for Toronto, left Prince Rupert in third place overall, though Rektor observed that at next years Annual Report it would be expected that Prince Rupert would most likely return to the second spot  in the nation. 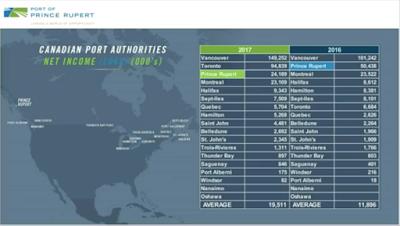 The full overview of the port operations can be found from the video of Tuesday's Annual Public Meeting starting at the 27 minute mark.


The complete Annual Report is available on line here.

Our archive of notes from the Annual Public Meeting can be reviewed here.

For more items of interest related to the Port of Prince Rupert and its terminal operations can be found here.

To return to the most recent blog posting of the day, click here.
Posted by . at 12:30 PM