As school year comes to an end, it's time for farewells ... for students and staff at SD52

The final hours of the 2017-18 School year are at hand, with Thursday the final day on the School District 52 calendar.

Across the city, classmates will be bidding farewell to their teachers, Principals and staff members, anxious to head off on their summer adventures.

For those that have finished the time with SD52 at Charles Hays and Pacific Coast School, the future beckons, whether it be college or university or off into the work force.

And even at the staff level, this week marks the end for some of their association with Prince Rupert School District, whether by retirement, or in the case of some, a transfer to a new District and new opportunities.

Earlier this year we took note of the departure of SD52 Superintendent Ken Minette, who announced in April his plans to move on, taking up duties in the Grand Forks region of the province.

More recently, the North Coast Review has heard of a pending change in direction and residence for two long standing members of the SD52 staff, with Kevin and Laila Leach making their plans for career opportunities in the Princeton area, where they will join the staff at SD58.

The pair of long time educators in the region, were highly regarded staff members at a number of schools over the last thirty years, most recently working at Charles Hays Secondary.

In addition to the departures from the North Coast, there was also some internal shuffling announced in May (some of it already out of date) as the School District made its plans for September.

If the past years are any indication, as the summer moves on, Board officials will no doubt learn of more staff departures as other teachers test out the employment waters in larger markets bringing their time on the North Coast to an end, and making for new entries for the career opportunities section of the SD52 website.

Already the Make a Future Website is recording a number of positions currently available with the School District for the September start of school. 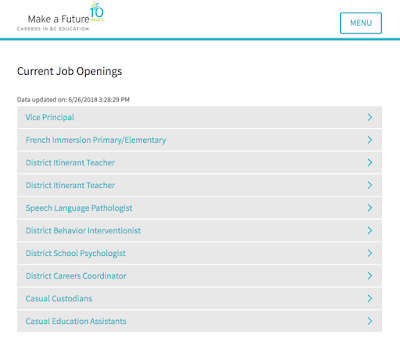 To return to the most recent blog posting of the day, click here.
Posted by . at 9:07 AM