A sustainable Prince Rupert made for the focus of close to forty minutes of Monday's City Council Session as Mayor Lee Brain, and Mr. Ken Shaw from NWCC and Transition Prince Rupert delivered the first draft of an expansive approach to changing the way residents of the city may look at sustainability issues.

To begin the presentation, Mayor Brain stepped down from his chair and turned over the proceedings to Councillor Mirau, as Mr. Brain and Shaw began to trace the path ahead towards a more sustainable future. 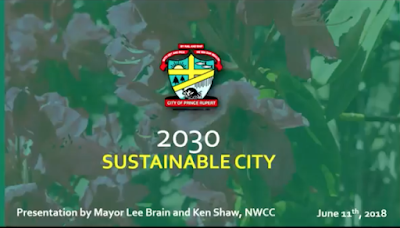 The presentation began with a review of the formation of the Mayor's Select committee, a small group of four people with expertise in sustainable policy development who have explored some of the themes over the last four years.

Mr. Brain noted how he has been interested in the topic of sustainable development from before his time as Mayor, and indeed his passion for sustainable issues does have some history with Mr. Brain a founding member of Transition Prince Rupert, the organization which was created in January of 2011 and which Mr. Shaw is currently the President of

Transition Prince Rupert has been a group that has advocated for change in the community over the course of those seven years, and as the Monday evening report rolled out, many of their themes appeared to have been integrated into the 2030 Sustainable City overview.

The Mayor, who first brought his Sustainable City initiative to council at the start of his mandate and made them part of his larger Hays 2.0 vision planning, also highlighted the range of activities he has been involved with across the province during his time in elected office, as he continued to  pursue those sustainability themes further.

As part of that review he listed off the range of conferences and other events that he has attended while Mayor to follow up on that interest in Sustainable issues, reviewing some of the grant opportunities that may be available for the community to look to access some of those funding options. 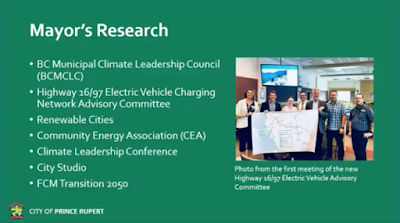 To set the scene, Mr. Shaw provided a short overview of how other communities have been addressing their approach to sustainable city issues, noting such places as Seattle, Portland, Vancouver and Victoria, as well as how some of the communities of Northwest BC have been looking towards the topic and what might fit the Prince Rupert model. 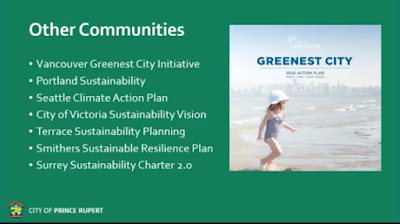 The Mayor then outlined how their framework development came about, and how they hope to deliver policies related to local food development, local energy, transportation, waste and place-making. 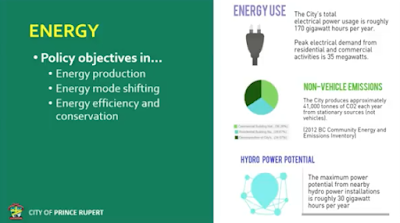 The Mayor's short mention of the potential of energy generation for the water supply dam, didn't expand too much on the theme of power production or what the cost for the city may be,  nor did Mr. Brain provide any indication as to whether the City has explored the issue with BC Hydro as they make their plans.

As of March, BC Hydro has scaled back on its call for supply when it comes to energy procurement from third party providers, putting the program on hold pending further review. 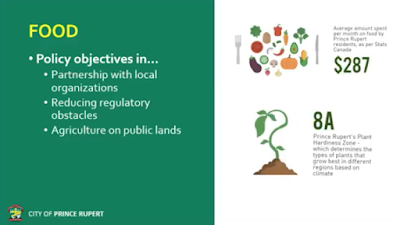 As for Food, Mr. Shaw provided a glimpse at some of the policy objectives which he says went beyond backyard hens and community gardens, with the goal that of economic development and building on partnerships, and exploring some of the economics involved in local food production and how it could impact on the economy and change how residents of the region view their grocery shopping options.

He made note of some of the local approaches already in place such as the Charles Hays garden, the plans for similar options for Overlook Street, McKay Street and at Annunciation school. 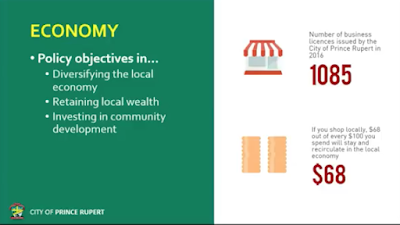 The Mayor highlighted the prospect of creating incubators that would help to develop new industries, and create new jobs in a sustainable way, noting how they could tie in with Councillor Mirau's Small Business objectives and create a new economy. 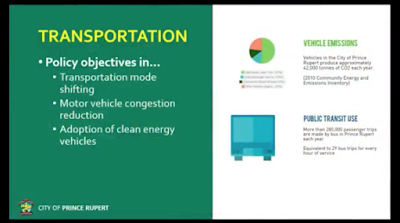 When it comes to vehicle emissions the Mayor made note of his hopes of establishing an electric vehicle charging network along Highway 16 and to electrify some of the civic vehicle fleet, as well as initiatives for public transit, bike options and other areas to reduce emissions in the community.

The Mayor made note of partnership opportunities with groups such as the Kaien Island Trail Society which could see the city facilitate the creation of their master plan of an integrated trail system in the community. 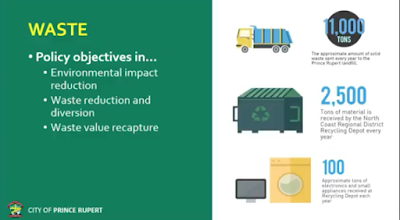 Waste also made for a segment of the presentation, with Mayor Brain noting the current need for expanded space at the city's landfill, he observe on some of his waste diversion concepts such as organics and community composting and curb side recycling, though he did note that the city's quest for grant funding to introduce that to the community fell through, with hopes to apply for a new grant and to introduce the program in 2019.

He also briefly looked at the need for the city's waste treatment issues and the need to move forward on a sustainable long term plan on how to manage waste. 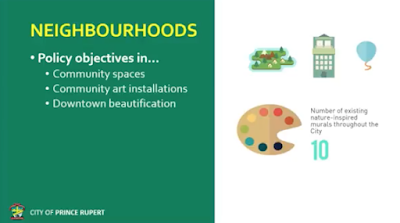 Mr. Shaw then looked at how neighbourhoods factor into their draft plan, calling Prince Rupert a city of villages where there is pride in local neighbourhoods, he outlined some areas where community spaces could be encouraged to foster further pride in those areas.

The Mayor made note of how the McKay Street Park project is a prime example as to how that works, recounting the work on that hard hit neighbourhood and the process they developed to deliver the McKay Street Park, which he said was created by the bottom up and was supported by Council and the city unions and benefited from the BCAA Play here contest.

He added that he hopes that the safety regulatory issues that have kept the park from opening will soon be addressed. The Mayor also called on the spirit found across clusters of neighbourhoods in the city and how it could bring back that neighbourhood space feeling through placemaking and other initiatives.

He also highlighted the work of Councillor Mirau's downtown business committee and how they have begun the process of exploring downtown beautification policies which were provided to council in April. 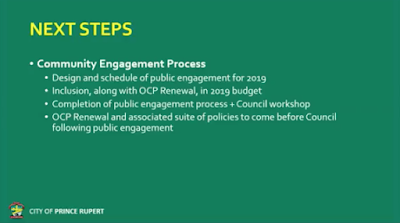 The Mayor noted that the report will be available online through the city website and then explored the steps ahead for the initiative, asking Council to see the report as a draft and then to design a public engagement strategy for 2019 with round table discussions on each policy segment, to build on the plan with the community, council and city staff to enable a new culture and new economy to emerge in Prince Rupert.

He noted that it doesn't mean a civic funded program but one that may develop the right policies to allow the community to start doing things themselves.

Mayor Brain also acknowledged the City's previous Green Task Force from 2009 and 2010, and some of the work that they took on, offering up his plan as more of a framework for further discussion.

He also tied his draft plan into the larger overview of the Official Community Plan and how that process will take about a year and a half, with his draft report leading to a City Council workshop to move forward on how to deliver it.

When the time came for Council members to share some thoughts on the presentation, the majority of the review was to provide for effusive praise for the Report and the plans that Mr. Brain and Mr. Shaw had identified.

Not included in the observations of Council were any inquiries about the costs associated not only for the preparation of the Report of Monday, but for how those initiatives may be introduced in the future.

As well, considering the range of other civic issues that face the city, the Council members did not provide any indication as to where they might place the Sustainable City concepts on any civic priority list for the challenges ahead.

As for the Council observations, Councillor Cunningham had praise for the report calling it fantastic and noted that he project is the kind of thing that could be a Legacy for the city and then addressed some issues he wants to address when it comes to recycling in the community and areas of engaging the community.

Council Niesh also commended the pair for their work and added his own thoughts on areas where the city could address sustainability issues and take the pressure off the city's landfill situation.

Councillor Randhawa also thanked the pair for their presentation and inquired about what kind of grants may be available when it comes to some of the themes explored, which provided the Mayor an opportunity to outline the nature of a grant program with the Federation of Canadian municipalities.

Towards the funding program Mayor Brain noted that he has already approached Terrace, Kitimat, Smithers and the Hazeltons to explore their interest in the funding opportunity for energy policies.

He also noted how the FCM had reached out to him to outline some of the programs that could be of interest to the community.

Councillor Thorkelson called the presentation an excellent report and then offered some background on what happened to the last Green Task Force initiative from 2009-10.

Calling on her time as part of that council she noted that if the Mayor hopes to avoid having the report become something that will end up on a shelf gathering dust, the city may need to hire on a dedicated employee towards sustainability issues or find an enthusiastic volunteer committee to oversee the program.

The Mayor noted that on that theme, that there is a grant soon to be available to cover 80 percent of such a salary for two years, fore just such a position.

Ms. Thorkelson also explored the nature of the Prince Rupert rental market with multiple properties owned by individuals or corporations and how some residents, both renters and home owners did not take advantage of the programs of that time and how the city needs to find a way to have them become involved in sustainable programs.

Councillor Mirau echoed the praise for the work of Mr. Brain and Shaw and noted that judging by the number of people in the gallery for the presentation finding community engagement should not pose a problem.

Council then voted to accept the recommendation to accept the report and to begin the consultation process with staff and to explore the associated budget cost to be approved by Council at a future council meeting and to take part in a Council workshop.

You can review the full presentation to Council from the City's Video Archive starting at the twenty two minute mark.


A review of some of the Sustainability plans, conferences and such that the Mayor and Council have put some focus on can be found on our archive page here.

For more items of note related to Monday's City Council session see our Council Timeline Feature here, as well as our Council Archive page for the June 11th meeting.

Further themes from City Council discussions can be found from our Council Discussion page.

To return to the most recent blog posting of the day, click here.
Posted by . at 12:29 PM