Annual Report presentation channels many of the Hays 2.0 themes


City Manager Robert Long stepped into the spotlight on Monday evening delivering the city's annual report for the year, expanding on the usual one year review of 2017 to reach back to cover some of the five years since he arrived back in Prince Rupert to take up his duties.

The report focused on many of the same area that Mayor Lee Brain covered during his April showcase event of the Hays 2.0 update, so much so, that you could probably call the Annual Report of Monday Hays 2.0 Bob's Notes.

The overview of the years achievements started out on notes from 2017, with the city for the most part acknowledging that Statistics Canada is the official statistician of record on population issues, with the most recent census report noting our population listed at 11, 733.

The observations from the City Manager however came with an asterisk, as Mr. Long added that Council still believes that there are more people than that living in the city.

He also put some focus on City Council's focus on social media, observing how the City's Facebook page has received an increased amount of likes in the last year. 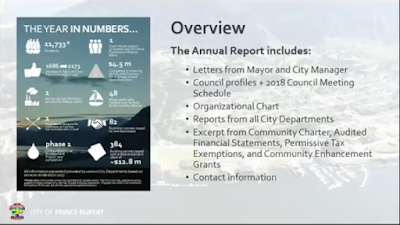 A short video followed those opening notes, with the City Manager providing the narrative to a short video review of some of the recent projects taken on by the City over the last five years.

The video provided for a visual review of items from Watson Island to the water supply replacement, civic centre renovations, to work at the RCMP detachment, Fire Service purchases and a range of infrastructure issues, including park replacement projects, trail construction and other civic initiatives, stressing some of the partnerships that the city has taken on over the last five years.

From 2017 Mr. Long also  made note of the successful result of the CUPE agreement with civic workers, as well as  Pembina investment plans for Watson Island.

He also spoke to the negotiations related to Ridley Island Tax Sharing and discussions with the Port on Cap issues.

He also explored some of the paving projects, infrastructure work and and other areas of note from January to December of the last year. 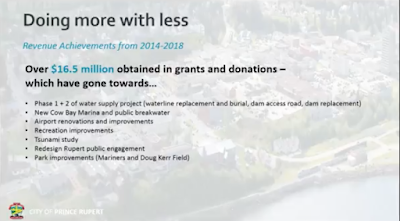 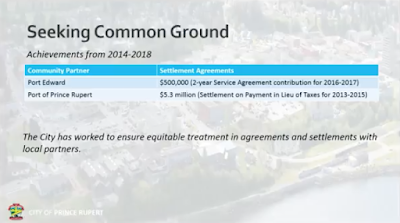 Looking back to the last five years, the City Manager noted how the city had been financially challenged when he arrived at City Hall, explaining how his job was to look for ways to increase revenues, which he observed he had achieved through partnerships, grants and donations.

From there he relayed the list of options he had taken advantage of to find funding for civic projects and ambitions, having accessed over 16.5 million dollars in grants and donations.

Mr. Long highlighted the Lease agreement with WCC LNG and the creation of Legacy Inc. which is where the city is putting the capital it receives from those lease revenues which are  transferred as dividends to the city through legacy.

The overview however did not dig too deep into the work of Legacy Corp and did not offer much detail into the current status of that financial instrument and how the city has made use of if to address its various challenges. 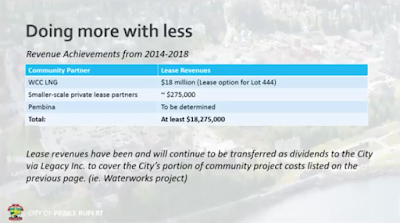 As well he expanded on some of the work done with other community partners such as the District of Port Edward and the Port of Prince Rupert, though he didn't provide an update on the current status of those discussions and if there has been a resolution to the city's ongoing irritation related to the Ridley Island Tax Sharing agreement or Port Cap issues.

The Watson Island overview provided a short history of the City's removal of the old pulp mill infrastructure and the new focus of turning it into a new industrial site, which he believes will generate substantial revenues owing to its water, road and rail access.

The focus was very much on the future, with little in the way of a review of the long trail of legal issues that dogged the industrial site for much of the last decade.. 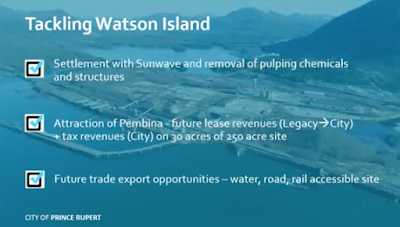 Mr Long observed that the Watson Island issue has taken up the majority of his time as City Manager and hailed the support of Council, the Mayor and staff to help turn the corner on the issue. Making note of the long hours put in by everyone to make the island a productive element for the community.

"Probably that has taken up most of my time here as the City Manager, trying to find our way through a successful outcome for Watson Island and with ongoing support of City Council, the Mayor and I have spent many, many hours trying to make Watson Island into a success again for this community, And I think we have rounded that corner and I'm proud of the work that everyone has done"

Another theme from the Mayor's April address at the Lester Centre made for a significant focus for the Annual Report, as the City Manager showed his enthusiasm for how the city has approached the issue of employee recruitment and retention.

Mr. Long noted how the city has built a supportive work culture and how that is the single most important thing that the team at City Hall has done to build for the future.

"That probably is the single most important thing that we've done as a team here, to actually give Prince Rupert a tremendous future. By investing in and being supportive of our young staff members who already are invested in the community, we are, I think,  allowing ourselves to have a tremendous, positive future going forward."

He also observed as to how he has learned from the younger staff members who have brought new and progressive ideas to the city, calling it a fun experience at City Hall where it is a calling more than a job, adding that happy people do more work than unhappy people. 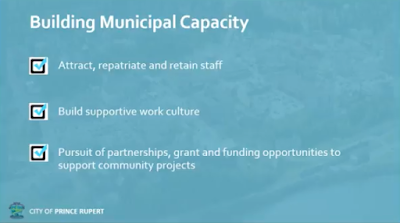 To highlight his thoughts on the level of service that staff is providing, the City Manager read out a letter from someone who had expressed their thanks to civic employees for their help in locating a grave site at the cemetery.

He observed how that it's an approach that the city wants its employees to take when they engage with the public.

Council members offered up no questions or observations on the report for the City Manager at the conclusion of his twenty minute presentation, with the mayor bringing the report to an end by noting that the presentation was a great job and how it shows the culture shift that has taken place at the city and all the work that staff has done.

The next step for the adoption of the Annual Report, will be an opportunity for comment by the public on June 25th with final consideration of the report to come following that meeting.

The Annual Report was part of a stream of information delivered to Council on Monday evening, with the City's Statement of Financial Information also released.

As we noted on Friday, those reports included the list of compensation and expenses for the City Council members as well as the annual release of compensation for civic employees making over 75,000 dollars.

You can review our notes on the reports below:


The full presentation from the City Manager can be reviewed from the City's Video Archive starting at the very beginning of Monday's Council session.


A wider overview of Mr. Long's presentation can be found as part of our Council Timeline Feature here.

A more expansive review of the themes for discussion at City Council can be found on our Council Discussion archive.