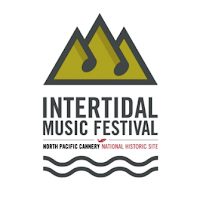 With another successful Seafest now in the books, North Coast residents and visitors from afar can rest up a bit, keeping an eye on the calendar for the return of an event which received quite the welcome one year ago.

Planning continues for the Second edition of the Intertidal Music Festival, with the North Pacific Cannery Historical site set to play host once again for a full day of music, food and brew planned for Saturday July 21st.

This years even features three stages for performances with a growing list of some of the top groups from around the Northwest, among some of the musical acts ready to take the stage are The Racket from the Hazeltons, as well as The Brazen Harlots and The Surfin Dudes, two North Coast groups that have proven to be crowd favourites.

So far eleven bands have confirmed their participation for the July event, with organizers expecting over two dozen artists and groups to be confirmed for the festival by mid July.

Food and beer also make for the atmosphere of the festival, the North Pacific Mess House Cafe will be featuring a range of epicurean options for those attending, as well patrons will have a choice of some of the city's food truck options to choose from.

The Port of Prince Rupert serves as the title sponsor for the event, which will be focused on the Historical site's Working dock which serves as the primary performance venue.

"We heard so many positive reviews of the first Intertidal ... The most common question we had was: is this going to be an annual thing? That's why we're so excited to be bringing it back for 2018."

The family friendly event features a range of activities for children and their parents with face painting, yoga and scavenger hunts part of the options for the day.

Putting on such a large community event requires volunteers, with over 100 helpful hands answering the call in 2017, you can find out more about how you can lend a hand here.

As it was last year, there will be no vehicles allowed onto the festival site, with the road to the Historical site closed in the Port Edward town site, shuttle buses will be providing for a regular service from the Prince Rupert Civic Centre to North Pacific on Festival Day.

Tickets are now available for the event, with early bird pricing in effect until midnight of June 30th. 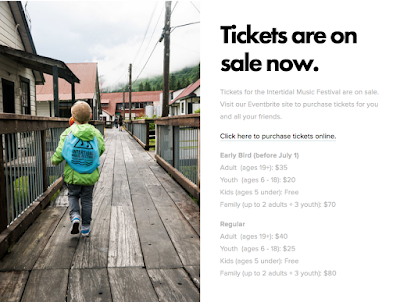 See the Intertidal Music Festival website for more details on the event and more information on how to pick up your tickets to the July Festival.

For more items related to Community events around the North Coast see our archive page here.