With a tweak to the question, the Province of BC outlines its electoral reform referendum regulations

The official campaign for electoral reform will kick off on Canada Day, but last Friday the starting gun for the most part was fired, as the Provincial government outlined the regulations that will govern the near six month process to determine if British Columbians will change their electoral system.

The guidelines provide some background on logistics, eligibility rules for designated groups on both the No and Yes sides of the debate, how advertising can be conducted, as well as how the campaigns pro and con can be financed.

Elections BC has been tasked to enforce any monetary penalties for contraventions and the Chief Electoral Officer for the province has been tasked to provide for neutral public information related to the vote and the voting systems that will appear on the ballot.

As for advertising, The regulations are set at a 200,000 dollar limit on referendum advertising expenses

The campaign itself starts July 1st and comes to an end on November 30th, the the voting to take place by mail in ballot between October 22nd and November 30th.

There will be Two Questions for voters to consider:

The First is pretty straightforward and will define the rest of the referendum:

The Second Question is based on whether the voter has chosen the proportional representation option:

If British Columbia adopts a proportional representation voting system, which of the following systems do you prefer? (Rank in order of preference. You may choose to support one, two or all three of the systems)

Those elements are making for some of the controversy over the roll out of the referendum process, with concerns that voters may not be fully informed as to what impact the three options of proportional representation may deliver on their constituencies.

Though one imagines that as the course of the next five months move forward, those with an interest in the referendum will be hearing more about not only about how any new electoral maps may look, but how the change of make up for the Legislature could impact on the delivery of legislation in the years to come.

Skeena MLA Ellis Ross, spoke often to the issue of electoral reform in the legislature session just ended, in late May he outlined how the November will be the biggest issue that residents of the Province will see this year. 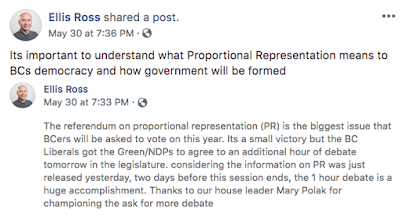 North Coast MLA Jennifer Rice, has taken the NDP government's message to the constituency in the past and spoken in support of the concept of proportional representation. She however, has not had much to offer up in recent days as the government introduced its regulations for the November vote.

Earlier this month, we reviewed some of the talking points from both corners of the Northwest ridings.

The vote marks the third time that British Columbian's have been consulted on their electoral system, having twice previous chosen to stay with the current model of first past the post.

You can review more of Friday's announcement here.

Over on our political blog D'Arcy McGee, we have been keeping an eye on the referendum process ahead with this archive.

Further notes about the work of the North Coast MLA in the Legislature can be reviewed here.