It's last call for playtime at Mariner's Park for a week, with today the last day of access for the playground at the First Avenue East spot overlooking the harbour.

The City of Prince Rupert announced yesterday that they will be temporarily closing the popular play area in order for warranty work on the rubber safety area to take place.

The Closure will be in effect from Friday June 15th through to Friday, June 22nd.

The City notes that it is important that residents not go beyond the construction fencing that will be in place around the play area, adding that they have also contact the RCMP to put on extra patrols to guard against vandalism in the area.

While they list June 22nd as the last day for the closure, the city may be hedging their bets a bit with an advisory that "look forward to reopening the playground as soon as possible"

You can review the public advisory here.

The warranty work on the playground isn't the only construction taking place at the park, Over the last few week City work crews have removed the original Mariner's Park Sign that made for the welcome post the city green space.


Work will soon be underway to construct a new sign, with the City having previously announced plans to host a celebration at Mariner's Park on June 23rd. 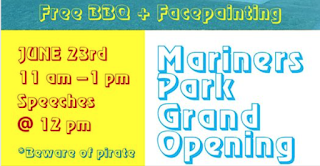 More items of note from Prince Rupert City Council can be reviewed from our Council Discussion Archive.

To return to the most recent blog posting of the day, click here.
Posted by . at 10:06 AM