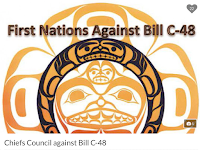 A group representing a collection of some 30 First Nations communities across Alberta and British Columbia are moving forward with plans to mount a legal challenge to the Federal Government's proposed oil tanker ban on the coast of British Columbia.

In a media release issued today from Lax Kw'alaams, the group known as the Chiefs Council announced their plans to set up a GoFundMe page designed "to assist with the legal and administrative costs needed to quash the Government's unilaterally imposed Oil Tanker Moratorium Act and the establishment of the Great Bear Rainforest"

The group notes in their information release of today that they consider "both of those initiatives to have been promoted largely through the lobbying of foreign financed Environmental Non Government Organizations and done without consultation and consent of First Nations as required under the Constitution."

In their background piece, the Chiefs Council outlines their role as first stewards of their traditional territories and that they vehemently  are opposed to American based ENGO's dictating government policy in their traditional territories. Actions which they state harm their communities and deny their leaders the opportunity to create hope and a brighter future for their members.

Most recently the group has been in the forefront of support for a First Nations led initiative to build a pipeline from Alberta to the North Coast, with plans to ship oil refined in Alberta to a fifty million dollar oil shipment terminal to be located somewhere on the North Coast.

Prince Rupert and Lax Kw'alaams have been frequently mentioned as potential sites for that development.

The proposed project known as the Eagle Spirit Energy pipeline has been in the development phase for a number of years, however the recent oil tanker moratorium plans from the Federal Government would clearly be something that would have significant impact on those plans.

Many of the themes of the fundraising efforts seem to be similar to recent discussion points higlighted by Calvin Helin, a Lax Kw'alaams resident who has been the lead proponent of the Eagle Spirit plans, which is a consortium of First Nations and the Vancouver Aquilini Group.

He recently relayed many of the themes related to the environmental NGOS, in a article for the National Post in the fall, we featured that contribution  in this blog item of November 21st.

Included in their Presentation to build support for the Go Fund Me Plans, is a video which highlights the connection between Eagle Spirit Energy and the Chiefs Council, expanding on how that relationship would work should they ever move forward with their pipeline and terminal project.


You can review the details to today's announcement here.

Those with an interest in the Go Fund Me page can learn more about it here.

According to the background on the Go Fund Me page, the fundraising started in November of 2017.

So far the results of their fundraising have seen the group receive just under $2,800 towards the $100,000 dollars they hope to collect to put towards their court challenge of Bill C-48.

Our past notes on the Eagle Spirit Energy plans can be found on our archive page.
Posted by . at 3:32 PM