With a Storm Warning in effect for waters off Haida Gwaii, BC Ferries has announced that there will be a Service Disruption in place today for the service provided by the Kwuna between Alliford Bay and Skidegate.

The Storm Warning was issued at 4 AM and lists winds of up to 50 knots to be expected by this afternoon in Hecate Strait.

Seas of four to five metres in the north and up to 7 metres in the South are anticipated by this afternoon as well with conditions to subside by Wednesday. 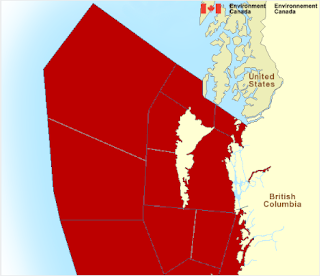 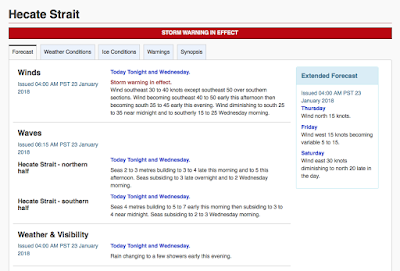 Updates on Service Notices for BC Ferries can be found here.

For more items of note related to Marine Transportation on the North Coast see our archive page.

Email ThisBlogThis!Share to TwitterShare to FacebookShare to Pinterest
Labels: Storm conditions off Haida Gwai result in cancellation of Kwuna service