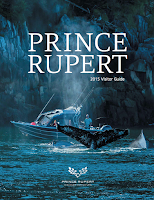 Tourism officials in Prince Rupert are looking to give the British Columbia Government and BC Ferries a few good reasons to extend the peak summer season schedule on the North and Central Coast and Haida Gwaii starting in 2019.


Towards that goal, The Board of Directors of Tourism Prince Rupert recently passed a motion to engage the services of Wave Point Consulting which would provide their services toward information gathering for the report and to help steer the proposed project to completion.

The focus for the work will be Routes 10 and 11 of the BC Ferries system, linking Prince Rupert with Haida Gwaii and Port Hardy onVancouver Island.

Tourism Prince Rupert Board Chair Scott Farwell notes in a correspondence with the North Coast Regional District that BC Ferries plays a critical role in economic development on the North Coast through the highway 16 corridor.

He outlines for Regional District that the two BC Ferries routes that sail out of Prince Rupert, are relied on by many communities for the transportation of goods and services and are considered to be critical components of the regional tourism economy.

The goal for the project is to provide the required information to engage the British Columbia Government and BC Ferries and to give them a better understanding of the unique transportation requirements of the North Coast and to help make the economic argument to extend the peak summer sailing schedule to its historic levels from before 2014.

Should Tourism Prince Rupert be successful in achieving that, they believe that it will result in increased visitor traffic to communities on the North Coast, Haida Gwaii and Vancouver Island.

A glimpse at what WavePoint  has to offer through their project, is being provided to the North Coast Regional Council for their review at Friday's Prince Rupert meeting.

As part of their introduction of the report plans Tourism Prince Rupert is hoping to gain both financial and political support for their project for area governments.

In the prospectus preview for Tourism Prince Rupert provided by Wave Point  the organization highlights a number of elements that will make for the final document.

Identify a Mechanism and Develop Recommendations to the North Coast Ferry Advisory Committee for Improved Dialogue with Provincial Government and BC Ferries.

Identify and Demonstrate that BC Ferries is the Critic Component in Creating Economic Development for Vancouver Island and Northern BC.

Identify and Develop the Rationale that will lead to Obtaining a Commitment from the Province to a 5 year Schedule Cycle.

By making for a case that highlights both the social impact of ferry service and the economic benefits to the region that improved Ferry service would provide for, Tourism Prince Rupert is tapping the two main themes that many local political leaders have been bringing to the province and BC Ferries over the years.

The call for a return to an increased level of service has been a frequent topic of discussion for area politicians since reduced service was put in place on the two routes earlier this decade.

The estimated cost of the report is 36,000 dollars with a fourteen week timeline indicated from start delivery of the final draft of the report.

You can review the talking points for the project as well as the full eighteen page document from the North Coast Regional District Agenda package for tomorrow night's District session.

For more items related to BC Ferries service on the North Coast see our archive page here.

Notes on Tourism in the Northwest can be found here, while a review of items of interest from North Coast Regional District can be explored on our archive page here.
Posted by . at 9:40 AM

Email ThisBlogThis!Share to TwitterShare to FacebookShare to Pinterest
Labels: Tourism Report to help make case for better BC Ferry service