Preparations ramping up for 59th Annual All Native Basketball Tournament We're less than one month away from the tip off for the 59th Annual All Native Basketball Tournament and as one of the city's largest events comes up over the horizon, organizers of the tournament have been busy knocking off a fairly busy to do list.

Last week, Tournament officials outlined that Friday, January 19th will be the deadline for all team confirmations, with those teams coming to town to participate in the tournament expected to have their final rosters and entry fees delivered to the tournament committee.

If there are any teams that have not received their Invite packages they are asked to contact the ANBT office at 250-627-8997 or by email to peterhaugan@yahoo.ca

The committee has also announced that after a Board meeting on January 12th, a decision was made to invite the Kincolith Intermediate team to this years tournament.

With the countdown now underway, the ANBT committee is also putting the wrap on their tournament program, which will be published by Black Press, the deadline for any businesses or organizations looking to place an ad in the program is January 26th. 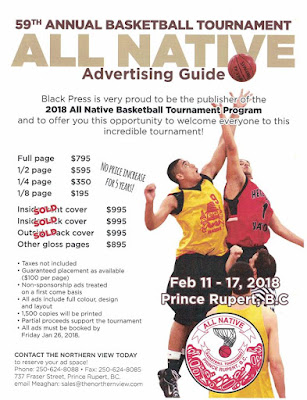 The Tournament takes to  court  on February 11th, launching the six days of rivalry and high tempo basketball leading up to the Finals of February 17th. In addition to the basketball, the week will feature the showcase event of the Opening Ceremonies and the installation of the newest members of the ANBT Hall of Fame for 2018.

The Rosters and schedule for the four Divisions of the tournament will be revealed in the next few weeks, Season pass information and other ticket information is available from the ANBT offices at 259 Third Avenue West.

You can keep up to date on any late developments from the Tournament through the ANBT Facebook page.

More notes on the tournament are available through our archive page here.
Posted by . at 9:11 AM