Where were you when the Tsunami Warning for Tuesday morning was issued?

In the case of many on the North Coast, sleeping soundly in bed would seem to be the answer of the majority, with many Rupertites deep in slumber, blissfully unaware as the early morning excitement took place along the Alaskan and British Columbia coast.

A combination of an early hour and lack of single message system which made for an Early Morning Warning, that few in the community may actually have heard.

For the most part, the only residents of the region who may have had knowledge of the issuing of a Tsunami Warning for the North Coast this morning, were those who had stayed up late and happen to keep a watchful eye on their social media streams.

When the first word of that the major 7.9 magnitude earthquake had struck near Kodiak Alaska was delivered at just after 1:30 AM the relay of information began for the North Coast.

As part of their response, the City of Prince Rupert activated its Emergency Operations Centre and provided for some good and very helpful information for residents through their website and the range of Social media options that they have.

However a larger and more expansive alert to take that news to the public was not available to deliver word of the situation and where residents should turn to get more information.


The province currently has plans to put in place a Text Alert system in BC, to enhance the current information that they have in place.

At the moment, that proposed text alert system is not expected to be activated until April of this year. 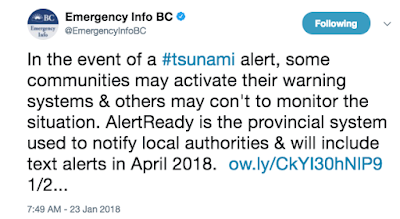 As it was, with no emergency sirens located in the community, it would seem that few of those who live in the city, unless they had been alerted by family or friends, were even aware of the potential of a Tsunami until they woke up and began exploring their social media accounts, or had turned on their radios.

Considering the tendency for some in the community to actually head towards the waterfront to watch for the waves when such alerts are issued (as has been the case in the past), the early morning hour of the incident probably reduced the amount of traffic on the roads and worked to the benefit of both the local RCMP and Fire Department as they took to their duties in response to the situation.

Still, the lack of audible warning for the community may be a topic that comes up at a future City Council session, particularly as the theme of bringing back the large emergency sirens that once were located in the city has made for discussion for past City Councils.

The siren system was eliminated a number of years ago, though the calls for their return do pop up following such large events of the scale of Tuesday's Alaskan quake,  or the large 7.7 magnitude earthquake on Haida Gwaii in October of 2012.

With that experience of six years ago, Community Sirens were activated on Haida Gwaii as the Tsunami Alert was issued on Tuesday, with the Fire Department also advising residents to move to higher ground.

In their notice to the community of early Tuesday morning, the City of Prince Rupert noted that they were currently commissioning a study to identify local inundation zones that may be at risk for flooding in the event of a tsunami event.

That's a project which we reviewed on the blog back in December of 2017.

The City might also want to include a review and a public discussion on the options available for better notification for the public, improving on the process which is currently in place when it comes to major alerts such as the Tuesday Tsunami warning.

While the information they provided was very useful and served the purpose of the emergency response that was in place,  it's not of much use to the public if no one is aware of the emergency situation in the first place.

To provide some background for residents the City posted some Frequently Asked Questions to their website on Tuesday, highlighting their procedures for alerting the public.

You can review more about this mornings Quake in Alaska and the warnings for BC here.

More items of interest related to Prince Rupert City Council can be found on our archive page.
Posted by . at 10:23 AM

Email ThisBlogThis!Share to TwitterShare to FacebookShare to Pinterest
Labels: An early morning warning that few may have heard