Changes ahead for usage rates at Cow Bay Marina 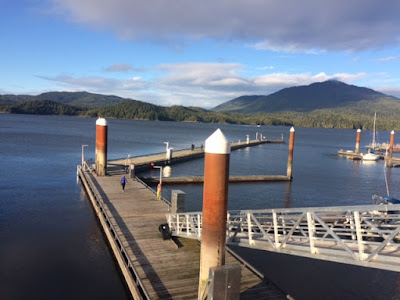 Council members received a short overview of the workings of the City's Cow Bay Marina on Monday night, as the City's Financial Officer stepped in for the Manager of Transportation and Economic Development to outline a few changes that are planned for the fees structure for 2018.

During her review, Ms. Bomben noted that since it began operations, the Cow Bay Marina has brought an estimated 2.5 million dollars in economic spin off benefits to Prince Rupert from 2016-2017.

As for the proposed changes to the bylaw adopted in 2016,  Council  passed the first three readings to update a fee category for super yachts, creating a new rate to address this growing sector of the boating industry and one which can bring additional revenue to the community. 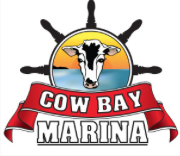 As well the City plans to increase the monthly moorage rates during the peak summer months of June through August.

Ms. Bomben noted that will enable the city to try to capture a larger share of the itinerant traffic that travels up and down the British Columbia coast. By doing that the City will also be able to reach the original goals and requirements of the grant process that was accessed during the planning for the Marina Facility.

There will also be a fee for marine facility security a fee that had not been contemplated during the creation of the original bylaws.

Should the 2018 Season follow the same path as the 2017 season it has been estimated that the City could see a targeted revenue increase of between 5 to 8 percent from the Schedule B rate changes. 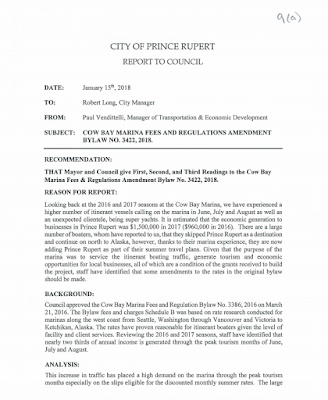 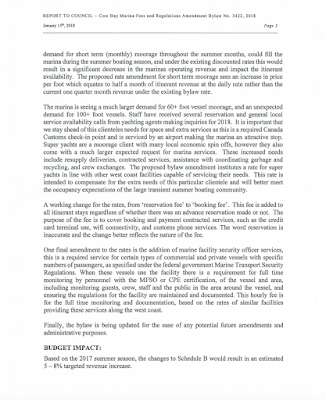 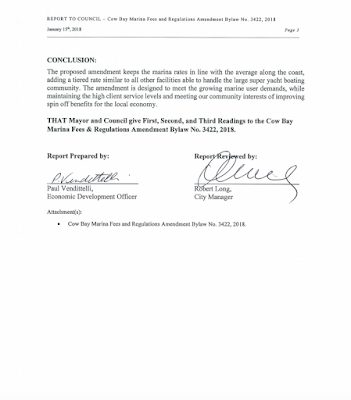 You can review the full report from the Council Agenda package for January 15th starting on page 10 .

Council members had a few observations and questions on the theme, with Councillor Randhawa inquiring as to potential demand for itinerant vessel visits and the possibility of the city pricing the marina out of the market, he also asked for an update on what kind of forecast the changes might bring towards revenue for the season ahead.

Councillor Niesh offered up his support for the scope of the changes and the new revisions in place.

Councillor Cunningham observed that the Cow Bay Marina costs are in line with what is being charged at other facilities up and down the coast in the province, he also suggested some changes to the wording of the bylaw.

As a follow up to the theme of the Cow Bay Marina, Mr. Cunningham inquired as whether the City has made any progress on his original suggestion of creating a Fish Market for summer weekends at the Dock, he was advised that the City is still working towards that proposal.

Mr. Cunningham introduced that concept to Council last summer, noting how it would make for a natural attraction, comparing it to the Terrace Farmers Market that attracts large crowds on weekends.

Councillor Thorkelson asked for a definition of the term itinerant when it comes to the usage of the facility and what kind of time period that takes in and how does it impact on the rates that are required.

She also inquired as to the nature of the Administrative clean up towards the language of the bylaw and what the city hoped to achieve from those changes.

You can review the presentation to Council and follow up questions from Monday night's session from the Video Archive starting at the one minute mark.

Other past notes related to the city's plans for Waterfront development can be reviewed here.

Further background on City Council Discussion topics can be found on our Archive page.
Posted by . at 9:19 AM