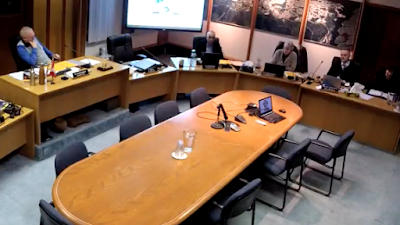 City Council held a quick review of the response to last weeks tsunami alert on the west coast, with a good portion of the discussion taking us back into the time machine and a look at 1964's major event before we returned to the theme of the most recent alert of January 23rd.

Councillor Thorkelson took advantage of the final portion of the evening to challenge some of the comments from the Committee of the Whole session, suggesting that Mr. Golden, who had provided for his own anecdotal review of that event  did not quite have the right information related to the 1964 earthquake and tsunami event of Good Friday of that year.

She observed from her notes that her research had determined that there was little in the way of damage that took place in Prince Rupert during that large scale earthquake event of over half a century ago.

From her overview, she offered up the observation that there is a report available for review for those that wish to examine the official data from the 1964 tsunami along the coast.

Those with an interest in the report that Ms. Thorkelson highlighted can review it here.

While we all head down to the Prince Rupert Library to determine which of the night's tsunami tutorials offered the best overview of the events of 1964, the more current tsunami alert incident was also up for review on the night.

Ms. Thorkelson opened her comments related to the January 23rd incident by coming to the defence of MLA Jennifer Rice, taking note of some of the commentary from the local newspaper that she had issues with when it came to their review of last weeks event.

She observed that Prince Rupert has not had any emergency sirens in place since the late seventies and the discontinuation of their use had nothing to do with the work of Ms Rice both during her time at Council and since moving to provincial politics.

When it comes to that topic of the week over the last seven days of the need for the return of an air raid type siren to alert the public, Ms. Thorkelson was of the opinion that following that path may not be the best course of action for the City.

Ms. Thorkelson cautioned council members as to whether the City would want to put such an alert program as using sirens into place, as it may lead to a large volume of residents heading towards the hospital and creating problems for those who need access to that facility.

"I think that people need to know what they are doing, but I think that putting a panic button on, so that everybody goes up to Roosevelt and we can't even get an ambulance through because its so packed because the air raid siren went off ... we should be careful what we wish for." -- Councillor Joy Thorkelson on the calls for an air raid siren type alert for future emergencies in the community

She also noted that after reviewing the reports from the last week in her opinion, the city handled the recent incident very well, highlighting how emergency services personnel were prepared to alert those that may have been in any danger had the need to arise.

One recommendation that she made was that the city should provide more information for the public as to the Tsunami warning signs in the community and where those routes lead towards.

She also suggested that as part of the city's upcoming study on Tsunami planning, that the City should ensure that part of the study be used to make sure that the City is doing a good job in communication when it comes to such events.

"I think part of that study should actually try to make sure that people feel assured that the city is going to do a good job in communication, so we should have a communication plan that is well debated, so people  feel that they have confidence in the city's plan"-- Councillor Joy Thorkelson on what she would like to see included as part of the city's upcoming Tsunami study project

You can review the city's plans for that Flood risk Assessment program here.

The councillor wrapped up her presentation by recounting some of experiences from Vancouver, as she had been in the Lower mainland during the recent warnings.

As a follow up to the discussion on the recent seismic event, Councillor Randhawa also added his thoughts and appreciation on what he called the great work of the city in responding to the situation.

He did inquire of staff if they have any plans to provide for to educate the public for future events.

The City's Financial Officer handled the request, first thanking Councillor Thorkelson and Randhawa for making note of the work of the emergency services last week, providing a short overview of some of the work that night.

She also added that the City's Emergency staff had determined that the response on the night was appropriate to the risks that had been presented to the community.

Looking to the future, Ms. Bomben advised that the City is looking at implementing an automated alert system for text and landlines, that will enable the City to provide local information to residents as it becomes available.

She also added that the City is looking at developing an application for mobile phones, the range of measures being planned will allow the city to provide better clarity on conditions for local residents.

From their learnings related to last weeks seismic event, the City will also begin a campaign to re-educate residents as to what to do in the event of a tsunami event, that project will be launched shortly.

The full review of tsunami alerts past and present can be found on the City's Video Archive starting at the thirty one minute mark.

A look at the current information provided by the City of Prince Rupert and its Tsunami preparations and guidelines can be found from the city's website here.


To return to the most recent blog posting of the day, click here.
Posted by . at 9:45 AM