The large seismic event of Tuesday's 7.9 magnitude earthquake near Kodiak Alaska continues to deliver some significant aftershocks to our neighbours to the north, with over 60 mid range rumblings continuing since the 1:30 AM wake up of yesterday morning.

The most recent one to be recorded, a 5.1 magnitude quake which rumbled along the fault line at 8:46 this morning.

For the North Coast, it's political rumblings that are dominating the post Tsumami warning period, with Prince Rupert's City Council feeling the majority of the heat in the region for what a number of residents consider a lack of proper notification of the provincial warnings of the overnight period.

Even the normally Council-friendly space of the Mayor's Facebook page has found some detractors posting their concerns over how the City approached the flow of information, once the Tsunami warnings had been issued up and down the Pacific West Coast from Alaska to California.

While the City posted regular information through its website and social media accounts during the course of the alerts, many Rupert residents have noted that without any way to know that those warnings were in effect, they were mostly in the dark (and for the most part fast asleep) and unaware to the City's alerts as the overnight events continued on until the all clear of 5:30 AM.

In a bid to try to address some of the growing concern on how the city approached the issue of information delivery, the Mayor provided for two posts on his Social Media Facebook page, both of which have found some readers weighing in with their impressions as to how the City handled the emergency alert. 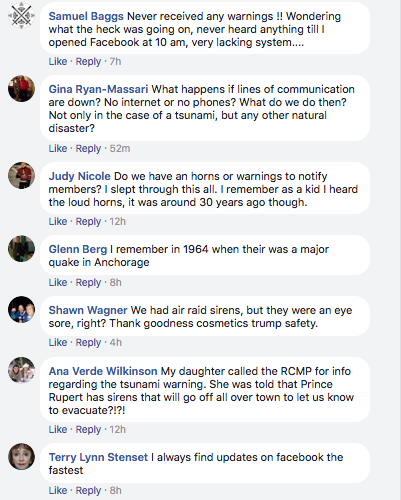 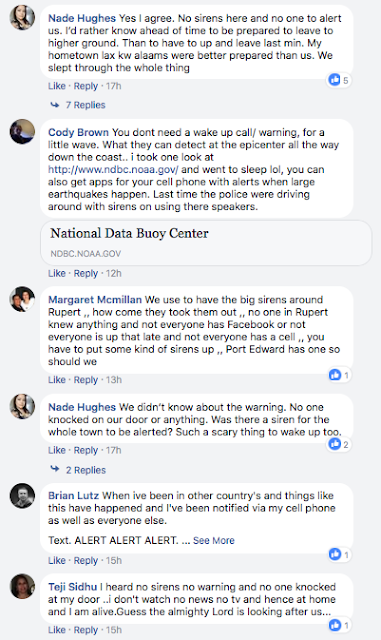 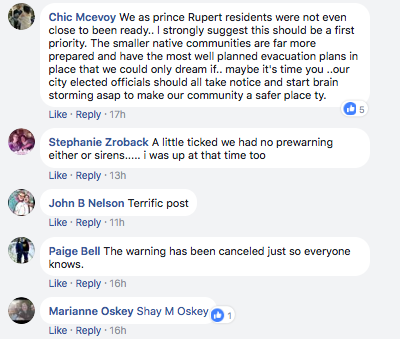 On the provincial side of the alert fallout, North Coast MLA Jennifer Rice, could be missing some of that concern from the home riding, at least if one tracks her own social media posts on Facebook and twitter of the last twenty four hours.

From the stream of notes from her social media messaging following the Tsunami alert there was no mention of the communications concerns being discussed around the community by her constituents.

For the most part, the majority of the information from Ms. Rice, the Parliamentary Secretary for Emergency Planing was posted to put the focus on how British Columbians could use the Tsunami Alert as a learning exercise and a good opportunity to review the Prepared BC notes on emergency preparations. 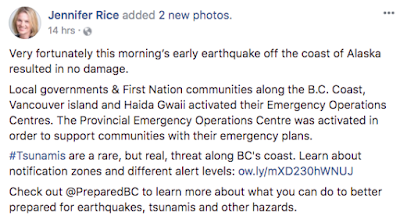 Lost it seems from both Social media approaches is an understanding of the frustration for those that did not know of the incident and that the City had activated its Emergency Response plan, or that the Province had issued the call to take precautions as they awaited more data as to the nature of the threat to the provinces coast line.

Mike Farnworth, the Minister of Public Safety did address the nature of the scattered way that warnings were delivered in the overnight period, promising a review of the situation and to explore ways to bring improvements to the way that the Province provides for its emergency messages.

You can review some of the concerns from other coastal communities, some of which had similar issues as Prince Rupert had, from our Victoria Viewpoints Archive page from Tuesday.

In what is a bit of timely opportunity, the next Prince Rupert City Council Session on Monday, should be one of Council's Community of the Whole sessions, which will provide for a public comment opportunity for residents of the city to share any concerns that they may have.

Should the Tsunami Alert of Tuesday still be a current for conversation in the community as next week starts,  City Council members may get a first hand review at just how the residents of their city feel about the way the flow of information was delivered and perhaps even receive some suggestions form the public for improvement as to how the City informs the community.

Monday's meeting will also offer the city's six council members and Mayor Brain the public forum of the Council session to review the Tsunami Alert and outline how they believe the City did in its response to the situation, as well as to explore ways where they might be able to do better the next time a similar situation comes about.

And as one expert on seismic activity has pointed out for Global TV yesterday, the next one will be coming and at some point in the future it will be stronger and closer to the British Columbia land mass.

For more items related to Tuesday's Alaskan earthquake and the BC Tsunami warning see twin articles from yesterday.

More items of interest related to Prince Rupert City Council can be found from our archive page.
Posted by . at 9:08 AM