The Government of British Columbia is receiving a fairly extensive list of issues to be addressed as they look to move forward with a Poverty Reduction strategy for the province, with the NDP government having held a string of consultation sessions across the Northwest over the last few days.

Early last week we provided this preview of some of the plans for the three day tour of the Northwest, with the first stop for the tour taking place in Prince Rupert on January 11th.

Once the Prince Rupert session had concluded, MLA Jennifer Rice provided the Coles' Notes version of the three hour session of Thursday at the Nisga'a Hall, outlining some of the key themes delivered by participants at the North Coast session.

Thursday's meeting was hosted by the North Coast MLA, who introduced Shane Simpson, the Minister of Social Development and Poverty Reduction to those in attendance at the session.

The Minister is steering the process of consultation prior to the provincial government's plans to put forward a comprehensive program to assist in the reduction of Poverty across BC.

Using her Facebook page to review the key points, Ms. Rice noted that such issues as Housing/Tenancy concerns, supports for Mental health, Transportation, Community Support and Systemic racism to name a few, were all raised by the estimated 150 local participants that the MLA observed were in attendance for the day. 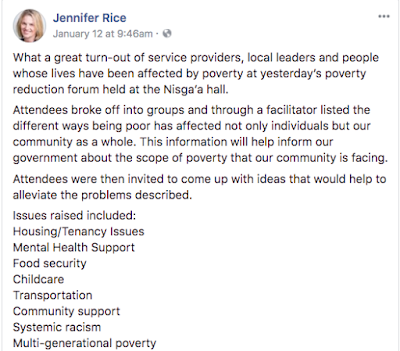 The tour then moved on to the Terrace/Kitimat region and Smithers, where similar themes were presented at sessions in those communities, with Doug Donaldson, the NDP MLA For Stikine also taking to his social media accounts to take note of the community forum in his riding.


For those that did not have an opportunity to participate in the forums across the Northwest, you can learn more about what the consultation project is all about and still make a contribution through the provincial government website

Some media notes on the tour of the last four days can be reviewed below:

For more items related to the provincial government see our archive page here.

Email ThisBlogThis!Share to TwitterShare to FacebookShare to Pinterest
Labels: Poverty reduction Tour of NW BC