The 15th annual gathering of the BC Natural Resources Forum came to an end on Thursday in Prince George, having brought together a range of participants and interested observers involved in the province's resource sector.

Included in the gathering this week were a number of LNG officials and some Northern British Columbia politicians, all of whom contributed to the final day of the three day conference by making a fair bit of news in a number of areas.

And while a major backdrop to the convention this year is the reality of a string of cancelled projects primarily in the Prince Rupert region, those taking part in the three day conference have looked to keep a positive approach to the future of the industry in the province.

With some of the key government leaders of both the Northeast and Northwest joining forces, to deliver a letter to both Federal and Provincial government urging for them to support the province's LNG sector.

In addition to the call for action from the governments, the letter highlighted the opportunities that they believe will be brought to the province with advancement of the industry, it's infrastructure and terminal locations.

In attendance from the Northwest this week were Kitimat Mayor Phil Germuth and Kevin Stewart the First Councillor of the Haisla Nation, with both Northwest representatives urging both levels of senior government to help move forward the prospect of LNG development and with it the potential construction for a pair of LNG terminals in the Kitimat region.


Also making for a well received presentation to the conference was Skeena MLA Ellis Ross who delivered one of the keynote addresses of the three days, with the Liberal MLA touching on many themes related to LNG development and the opportunities he believes it holds for residents of the Northwest.

Despite the fact that at one time the Prince Rupert region was considered a hot location for potential LNG terminal development, there does not appear to have been any government representation from the North Coast at this years meeting.

Indicative perhaps of the retreating tide for this area and any LNG ambitions that once were in play, not to mention marking for some fading print when it comes to the City's LNG Go Plan blue print.

That was the once highly touted document that we haven't heard much about of late from City Hall, particularly as the ambitious large scale projects for the region fall by the wayside one after the other.

While we don't appear to have had any municipal or regional representative, the North Coast did gain some exposure at this years Natural Resources event, with Ken Veldman from the Port of Prince Rupert taking part in a panel discussion related to international trade.

Also taking some time to take in the conference was Premier John Horgan, who seemed to provide some  cautious hope for those looking for positive signs from the NDP on LNG, when he noted for the audience at the forum that "our LNG market potential is starting to be straightened out" ...

The Premier telegraphed the more optimistic view of the province's LNG industry just ahead of his first large scale foreign trip, which will see Mr. Horgan depart for China on Saturday, as he and BC government officials head off for a string of discussions as part of a ten day trade mission.

Mr. Horgan's comments have seemingly sent an alarm bell off over at the Green Party headquarters, with the Greens leader Andrew Weaver making a bit of noise to suggest that if the NDP continue on with their current path when it comes to LNG, then the Greens may make a move to bring down the new Horgan government, something which would send us all back to the polls.

Mr. Weaver first offered up his talking point on the them through his twitter feed on January 17th. 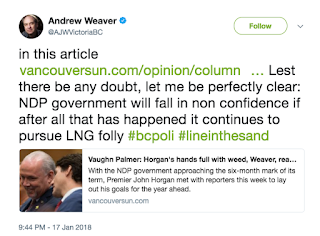 The potential shift in support for the NDP government quickly became a somewhat newsworthy theme over the course of Thursday.

You can get a glimpse of some of the highlights of the three day event from the Forum twitter feed.

Some of the expansive media coverage of the event can be found below:

While the LNG prospects seem to be dwindling on the North Coast at the moment, we are still tracking the latest news related to the industry from our LNG Archive page.

From that archive you can also find some background notes on the projects of the past proposed for the Prince Rupert area, as well as any updates or new developments related to potential terminal development in the region.

More notes on the provincial resource sector and other political notes can be found on our political portal D'Arcy McGee.
Posted by . at 9:00 AM