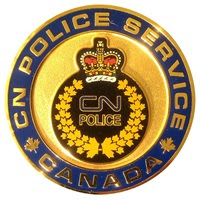 There will be no disruption of law enforcement duties on CN Rail right of ways and rail yards after the railway and its police force reached a tentative agreement over the weekend on a new labour agreement.

No terms were released by the railway as to the length of the contract or any additional rates of pay or new contract language, with details to be withheld pending ratification by the the Canadian National Railway Police Association which is expected to be completed by February 1st.

In Prince Rupert, CN Rail Police provide for law enforcement and security measures on the Prince Rupert waterfront rail yard, as well as along the mainline that runs from Prince Rupert and on through communities across Northwest British Columbia. 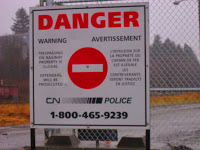 The railway's police department has born the brunt of much of the public's anger in Prince Rupert over the closure of access to the waterfront area, after signs and fencing were put up in October of 2016.

The reasons given at that time for the new regulations were related to safety issues along CN property, those concerns were brought to the forefront in the Terrace area in recent years with a number of pedestrian/train incidents resulting in deaths taking place on railway property in that community.

The railway announced the agreement on Monday.

You can learn more about the duties of the CN Police service here.

For more items related to CN Rail operations in the Northwest see our archive page here.

Update: On January 24th, The CN Railways Police Association announced that it had ratified  the six year agreement which will carry through until December 31st 2023 (see announcement here)
Posted by . at 9:10 AM