The normally sure footed and loquacious MP from Skeena-Bulkley Valley found himself in a wee bit of a controversy this week in the nations capital, after making an original statement to condemn the Liberals approach to summer job grant applications.

Mr. Cullen's troubles on the week began when he took a stance on the Liberal's rather strong terms on who can, or can't apply for the funding for Canada Summer Job opportunities.

Earlier this month the Liberal government outlined the new parameters for the funding, including a requirement that any applicants for the funding, pledge their respect for abortion rights and the rights of LGBTQ Canadians.

At the core to the debate over the controversy, is Section 3.1 of that program, the advisory for Eligible Employers. (click to enlarge) 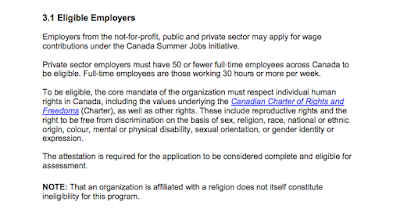 Following the introduction of the program, Mr. Cullen spoke to the issue, with his comments raising a few eyebrows among more than a few Canadians

By appearing to take the side of those expressing concerns about that requirement, Mr. Cullen found himself in some trouble with the NDP base, something which required a clarification from NDP leader Jagmeet Singh this week, who outlined the NDP's ongoing commitment to reproductive rights.

Such was the fall out from the Skeena MP's wording towards the issue (and his belief that his words had been misinterpreted), that he returned to the discussion in order to clarify his theme, taking to his twitter feed more than a few times last week to try and head off the controversy. 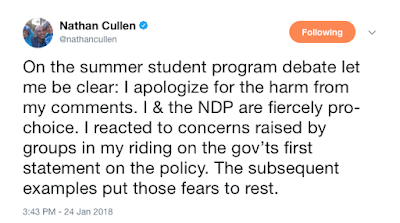 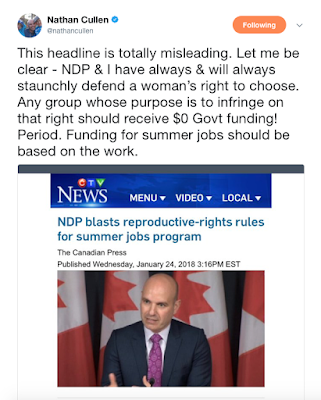 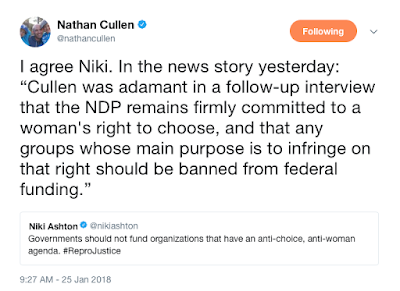 However, judging by the media attention that was generated from the weeks events, his tweets probably could have used a more expansive clarification,  before the reaction towards them became as widespread as it seems to have been.

Of note on this issue, the NDP MP limited his commentary towards the theme to his twitter feed, and making no mention of the ongoing tumult on either his constituency website, or through his often used Facebook portal.

It's the second time in recent months that Mr. Cullen seems to have gotten out ahead of a topic and had to back track to make things right.

In the fall, he announced that he was putting forward a recommendation that the name of the Federal riding he represents be changed from Skeena-Bulkley Valley to Skeena-Pacific Northwest, citing a survey he had conducted on his social media portals.

Such was the reaction that he received to that suggestion, that he again had to return to his social media accounts in December to set things right, in the case of the name change, to withdraw the project for now.

You can review more items of interest on the federal political scene in Bulkley Valley-Skeena from our archive page here.

A wider overview of national political developments is also available on our political blog D'Arcy McGee.
Posted by . at 12:31 PM