Rural communities up and down the British Columbia coast are about to see a major shift in their ability to receive internet services, with an announcement today from the Federal and Provincial governments that will see CityWest receive funding for the installation of a new subsea fibre optic line to run from Prince Rupert to Vancouver.

The large scale investment totals 45.4 million dollars and is part of the Federal Government's Connect to Innovate program.

“For too long people living along B.C.’s coast and Haida Gwaii have been forced to live in technological isolation which has affected their ability to communicate and do business in a digital world.”  ...  “This important investment will give coastal communities and First Nations better access to key services like healthcare and education, bring new economic opportunities in tourism and other industries, and improve our ability to respond to emergencies throughout the region." 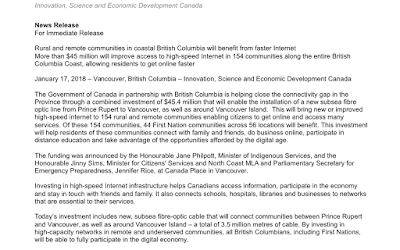 The full press release from the Federal Government can be reviewed here.

No timeline for the construction of the sub sea fibre link and introduction of the new service was provided at today's announcement.

We first took note of the proposed sub sea network plans last August, at that time CityWest outline how the project would not only improve the experience for customers in the Prince Rupert area, but also for customers in other markets served by the NorthWest communication company.

Items of interest on provincial political scene can be reviewed here.
Posted by . at 10:27 AM