A program which has seen the Prince Rupert detachment of the RCMP join forces with School District 52 and area businesses to deliver safe places for the the LGBTQ community in the city, is being touted as an initiative that small and medium communities in the province can use as they look to set up similar programs.

The Prince Rupert initiative was announced last week and will offer safe refuge for people who believe that they are the victim of ant-LGBTQ crimes or harassment, with prominently placed Safe Place signs indicating that the business, agency or any other participating location is a place that they can turn to for help and await the arrival of the RCMP.

Christine Danroth who was the driving force in bringing the program to Prince Rupert noted how the Safe Place initiative, which is based on a similar program in the City of Vancouver, has been well received by both the local RCMP members and other community partners.

"This was a collaborative effort. After seeing the stickers in Vancouver, we realized we need to see these everywhere. It sends a message of acceptance and that a safe place can be found for LGBTQ2+ individuals if they need help. Businesses can show support and it’s inclusive. I’m extremely proud we brought this forward and the RCMP responded. This is Pride"

Inspector Blake Ward, the Officer in Charge of the Prince Rupert detachment expressed his appreciation to Ms. Danforth for approaching the RCMP to bring the program to the North Coast.

"The Prince Rupert RCMP feel that public safety for all citizens without discrimination is important. When we were approached about implementing the program locally we thought that it was a great idea, and began to work with our provincial Headquarters and the RCMP National Headquarters to see how we could do it. This program heightens the awareness of the diversity within our community and the need for acceptance as everyone deserves a place where they are safe. We are very glad that Christine brought this idea to us and we are now able to introduce it into our community." 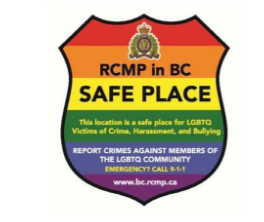 Steering the program for the Prince Rupert detachment is Constable Kayla Radford, she looks to the program to serve as a bridge to bring the community together and help to make all residents of the city feel safe.

"This initiative is important to me because I believe I can use the platform of being an officer to bring our city together in helping the entire population of Prince Rupert feel safe regardless of their orientation, gender or beliefs"

Charles Hays Secondary was one of the first to sign on to the program, introducing the initiative at their monthly Gay, Lesbian or whatever meeting which was held last week.

North Coast MLA Jennifer Rice was quick to hail the program through her social media feeds and to offer up her office as a potential place to become part of the Safe Place Program.

Should you wish to participate in the program, you can contact Constable Radford at the Prince Rupert detachment at 250-627-0700 to learn more about it.

The "Safe Place" program is to be introduced across British Columbia in he weeks and months to come and with it now officially launched in Prince Rupert, RCMP Crime Prevention officials at the BC District level are looking to the North Coast program to lead the way for the roll out across the province.

You can review some of the notes related to last week's announcement here.

For further items related to Emergency Responders in the Northwest see our archive page here.
Posted by . at 9:01 AM