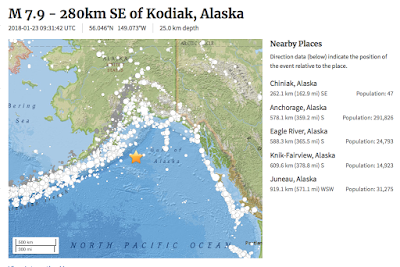 A major 7.9 magnitude earthquake near Kodiak Alaska, in the Gulf of Alaska area of the state briefly had all of Coastal Alaska and British Columbia under a Tsunami alert in the early hours of Tuesday morning.

The Quake which struck at 1:32 AM British Columbia time generated the first Tsunami Alert moments after the USGS had recorded the seismic event.

By 3:13 in the morning the Alaska and British Columbia Tsunami Warning Centre had cancelled the Tsunami Advisory, with the City of Prince Rupert issuing its final update of the morning at just before 5:30 AM. 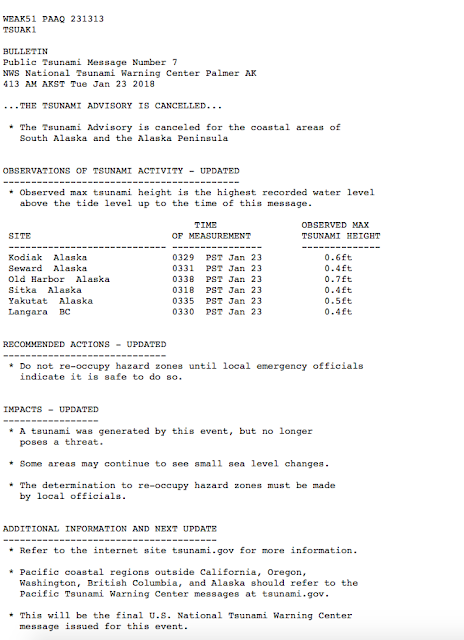 The details of the response in Prince Rupert were relayed through a statement issued by the Prince Rupert Fire Rescue Service, through the city website, Facebook page and twitter feed.

The advisory for the public notes that the city's Emergency Operations Centre had been put into operation at the Prince Rupert Fire Hall, with the Recreation Centre also activated to serve as an Emergency Reception Centre, had any need for evacuation be required.

Fire Chief Dave McKenzie was the lead hand in the Tsunami warning response and outlined the steps that the City had taken in response to the events.

“As soon as our staff received notice of the earthquake, our Emergency Operations Centre was initiated and Emergency staff gathered at the Fire Hall,”  ...“Staff were in direct contact with Emergency Management BC who provided updates regarding the warning status. Based on available data, it was not necessary to call a local state of emergency.”

During the course of the seismic event in Alaska and the tsunami warning on the North Coast, the local 911 service received 19 calls, with updates posted to social media to advise residents of any change to the alert status.

As the area remained under the Tsunami Warning and Alert members of the Prince Rupert RCMP and Prince Rupert Fire Rescue patrolled the low lying areas of the waterfront to keep community residents away from those areas and any potential impact from tidal events.

Included in the notes on the public advisory of the seismic event was a reminder for residents to avoid the area of the hospital during such incidents and warnings, while the area near the hospital is considered high ground, a large volume of people heading towards that area could have an impact on emergency service vehicles trying to reach the facility in such situations.

You can review the city's response to the event here.

The string of social media postings by the City provides a timeline of sorts for the seismic incident as it took place on the North Coast.

Alerts for British Columbia were also delivered through the province's Emergency Info Service.

Alaska media organizations relayed some of the details of the Kodiak event which you can review below:

There have been a number of lower magnitude aftershocks related to the early morning quake, you can review those findings from the USGS website.

More background on past seismic events along the coast of British Columbia can be found on our seismic event archive page.

Our follow up item of today, related to the lack of awareness for many Rupert residents when it comes to the overnight alert has also generated some strong interest as the day progressed, you can review it here.

As the day moved forward, some of the local news sources began to deliver their accounts of the early morning alert for the North Coast and Haida Gwai, some of those notes can be reviewed below:

A compilation of some of the stories and reaction from the Kodiak quake and BC Tsunami warning can be found from our political portal D'Arcy McGee for January 23rd
.
Posted by . at 6:45 AM

Email ThisBlogThis!Share to TwitterShare to FacebookShare to Pinterest
Labels: Tsunami warning overnight for North Coast Haida Gwaii and coastal BC