With Fairview Terminal on the cover, CN Rail makes for the feature profile for BC Shipping magazine

A magazine that has its finger on the pulse of the province's shipping industry has once again put the Port of Prince Rupert's Fairivew Terminal in the spotlight.

As BC Shipping features the container terminal on the cover of the February edition, while taking an expanded look at the supply chain opportunities that CN delivers to and from the Northwest gateway to the world.

The logistics of transportation make for theme of the  CN focus in the latest edition for the industrial magazine, which hosts an extensive interview with CN's Jean Jacques Ruest, who provides some thoughts on supply chain solutions culled from his  thirty years plus of experience in developing transportation and logistics programs.

CN has made Prince Rupert one of the key elements in its North American service, highlighting the railway's ability to take containers from Prince Rupert to the heart of the US transportation system in Chicago and then on into the Deep South of the USA.

The success of that service has been in how CN has made use of a schedule for transit and impressive dwell times that has raised the profile of Fairview Terminal for global shipping officials and marine transportation services.

The February 2018 edition of BC Shipping highlights the familiar look of the Fairview terminal on the cover, just the latest close up for the North Coast's economic engine,mwhich has been featured by the publication on a number of occasions over the last seven years.

Included in those reviews since the first Prince Rupert preview of 2011, have been items on grain and coal shipments out of the North Coast, as well as in depth articles with Port and industry officials, including some expansive past reviews from former Port President and CEO Don Krusel. 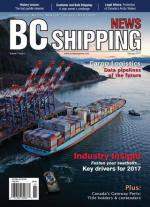 Many of the photos that BC Shipping has made use of over the years have been provided by Prince Rupert's own Lonnie Wishart, who has built a strong reputation for her photography work, particularly in the industrial sector across the Northwest.

Most recently, the Port's performance numbers for 2017 were also a feature for the publication in January, and last August the magazine devoted a fair bit of attention to the expansion and opening of the Phase II development of the Fairview Terminal

The magazine is subscription based, with the feature articles only available to those who have signed up for the magazine's distribution.

The do feature a range of articles on the shipping industry however in their archive page, which you can access here.

You can find more items of interest related to the Port of Prince Rupert and its terminals from our archive pages.


Further background on CN's footprint in the region can be found here.

Email ThisBlogThis!Share to TwitterShare to FacebookShare to Pinterest
Labels: Port of Prince Rupert and CN featured in February edition of BC shipping